It has long been assumed that hunters in the woods will draw grizzly bears expecting the fresh blood of big... 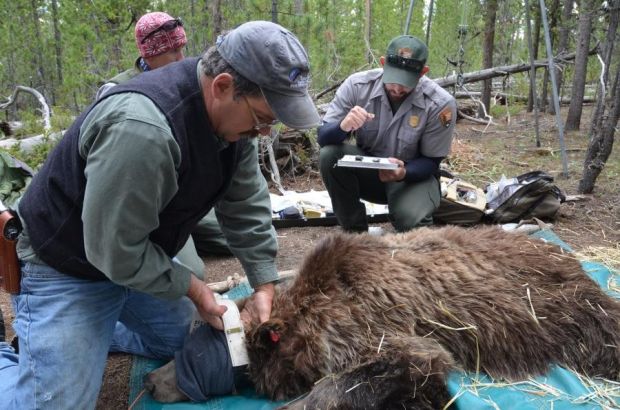 It has long been assumed that hunters in the woods will draw grizzly bears expecting the fresh blood of big game on the ground—one explanation for hunter-bear conflicts in the fall. To lend some scientific credibility to that notion, a team of researchers in Grand Teton National Park is tracking both hunters and grizzlies with GPS signals to see where, and why, their paths intersect.

The leader of the effort, Mike Ebinger of the Interagency Grizzly Bear Study Team (IGBST), says the purpose of the two-year study is to learn more about the causes of hunter-grizzly encounters—like whether grizzlies converge in an area because echoing rifle shots signal an easy meal. Earlier this year, members of the IGBST fitted GPS collars to eight bears and began tracking the animals’ movements. They also loaned GPS units to hunters, and marked known locations of harvested elk. Hunters willing to volunteer for the study are entered into a prize raffle, according to the Billings Gazette.

“We want to know on a daily basis where the gut piles are,” Ebinger said. “We’re not interested in the elk gut piles, but in how the grizzly bears respond to them. They can be a very attractive resource.” In one case, where Ebinger was able to overlay the GPS data from a group of hunters with the data from a bear that was nearby, it appears the bear was only 100 yards from the hunters, at one point. The hunters later said they were completely unaware of its presence. The bear bedded down, but hours later it picked up the hunter’s cold trail, possibly hoping it would lead to an elk carcass.

It’s estimated that a grizzly’s scent-detecting area is 100 times larger than a human’s, making its sense of smell seven times better than a bloodhound’s. In fact, it’s likely that the animal’s keen sense of smell led to a fatal grizzly attack on a hunter field-dressing the elk he’d just shot in Montana in 2001. As grizzly populations in the northern Rocky Mountains grow, hunter-bear conflicts have become a genuine concern, especially in the fall, when bears are also hunting for wild protein to prepare their bodies for hibernation. Bear encounters near big game carcasses are frequent enough that Montana Fish, Wildlife & Parks requires bison hunters to relocate carcasses and gut piles at least 200 yards from homes, roads, and trails, to decrease the chance of human-bear interactions. However, Ebinger stressed that his work isn’t meant to affect hunting regulations.