Photograph via WDRB footage Earlier this week, the debate over drone use was reignited when a Kentucky man named William... 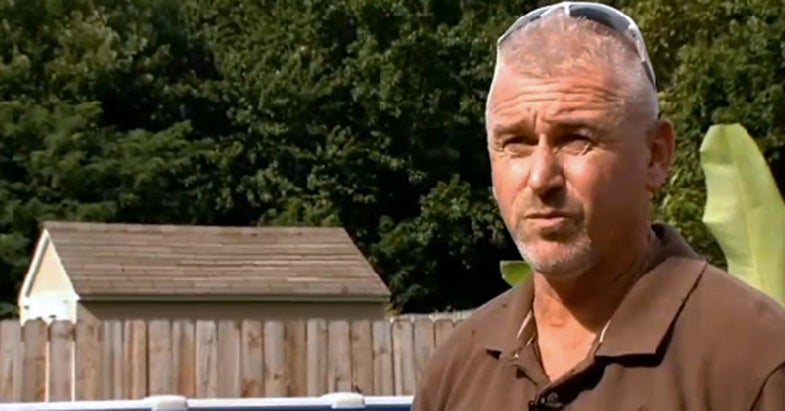 Earlier this week, the debate over drone use was reignited when a Kentucky man named William Merideth, 47, was arrested and charged with criminal mischief and wanton endangerment after shooting down an $1,800 aerial camera, which, he claims, was hovering above his sunbathing 16-year-old daughter in the family’s backyard. Merideth cites his right to privacy as justification for his actions. “Sunday afternoon, the kids—my girls—were out on the back deck, and the neighbors were out in their yard,” he told FOX affiliate WDRB. “And they come in and said, ‘Dad, there’s a drone out here, flying over everybody’s yard.'”

According to Merideth, the drone hovered for a few moments until his daughter waved it away, but it soon returned. When he saw it nearby, 10 feet above the ground, peeking under his neighbor’s backyard canopy, he grabbed a shotgun. “It was hovering over top of my property, and I shot it out of the sky,” he said. “I didn’t shoot across the road, I didn’t shoot across my neighbor’s fences, I shot directly into the air.”

According to Merideth, a few minutes after he shot down the drone, four men, each clearly upset, arrived at his house and asked if he was the one who fired at their drone. Merideth, with a lawfully-carried Glock on his hip, replied, “If you cross that sidewalk onto my property, there’s going to be another shooting.” The men retreated to their car and waited for police to arrive.

The men later claimed that they were taking photos of a friend’s house with the drone; however, according to Merideth, authorities returned the device to them without first checking the camera card to corroborate their story. Police arrested Merideth and charged him with first-degree criminal mischief and first-degree wanton endangerment. He was released the following day.

WBRB notes that the Federal Aviation Administration (FAA) prohibits drones from being flown over buildings, but is clear that shooting them from the sky threatens public safety, as they could crash into people and property in their uncontrolled descents.

Since news broke of Merideth’s arrest, the drone’s pilot, David Boggs, has come forward with his own account of the incident, claiming that data from the flight recorder shows that the craft wasn’t trespassing or flying as low as Merideth claims. “[We didn’t] hover over their house to look in,” Boggs said, reviewing the footage with WDRB. “And [we] for sure didn’t descend down to no 10 feet, or look under someone’s canopy, or at somebody’s daughter.”

Merideth, however, remains unconvinced and, according to the most recent reports, plans to pursue legal action against the drone’s owner: “When you’re in your own property, with a six-foot fence, you have the expectation of privacy. To me, it was the same as trespassing. We’re not going to let it go. I believe there are rules that need to be put into place, and the situation needs to be addressed because everyone I’ve spoke to, including police, have said they would have done the same thing.”

According to WDRB, the incident inspired the FAA to review its rules about such matters. “The best the agency can tell us is if a drone is hovering under 10 feet on your property, it might be considered trespassing,” the news station reports.