Photograph courtesy of Leigh Klotz/Flickr Feral hogs are responsible for damaging about 17,000 acres in Hillsborough County, Fla., and, after... 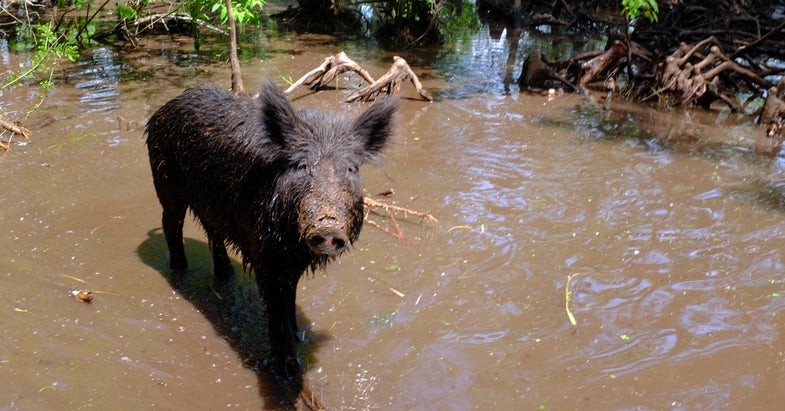 Feral hogs are responsible for damaging about 17,000 acres in Hillsborough County, Fla., and, after 11 years of sport hunting and trapping, their numbers continue to increase. So now, the local government will step in and try to cull the hogs from county land, as The Tampa Bay Times reports. Funding for a joint hog-eradication plan between the Hillsborough County Sheriff’s Office and the Conservation and Environmental Lands Management Department is in the 2016 county budget proposal, slated for $40,000.

Ken Bradshaw, Hillsborough county’s environmental lands management coordinator, said that killing hogs is only one facet of the plan. “The most effective strategy for hogs is to use multiple techniques or methods of removal.” Passage of the proposal will mean that public, county-owned land is off limits for hog hunters. But according to Bradshaw, sport hunting “has not been shown to be effective in reducing hog populations.”

Hog removal will instead fall to trained deputies and land-management personnel, with the goal of totally eradicating sounders (hog herds). “If you don’t get the whole sounder out,” Bradshaw said, “they may come back.”

Local opponents of the measure claim that the killing is unnecessary. Among those opposed is Nick Atwood, campaigns coordinator for the Animal Rights Foundation of Florida, who thinks that, despite the hogs’ invasive-species status, eliminating them by force is unnecessary. Atwood points the finger at overdevelopment as the culprit by squeezing feral hogs into less habitat and closer to people. Atwood also believes that the hogs have been in Florida long enough to drop the invasive label. “They’ve been here longer than us,” he said. “If we were talking about white-tailed deer or vultures or other animals that cause damage, I think the state and counties would come up with more creative solutions instead of always turning to control.”

Atwood and Kent Bailey, chairman of Tampa Bay Group Sierra Club, said that more Florida panthers could curb the pig problem, too. But the current panther population, between 100 and 180, is nowhere near the size needed to control the hogs.

Should the proposal pass, all pork harvested from county-killed hogs is slated for donation to the Wild Game Food Bank. From there, the meat will be given to area food banks and soup kitchens. Implementing the program hinges on its inclusion in the final budget, expected to pass in September.