How far would you go to protect your family pet from predators? Well, in 2014, Paul Mott of San Diego,... 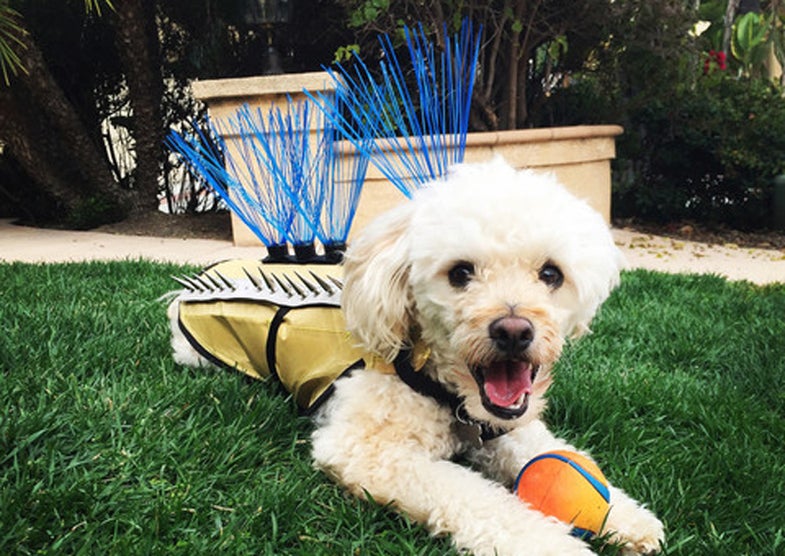 How far would you go to protect your family pet from predators? Well, in 2014, Paul Mott of San Diego, California, watched a coyote grab his dog, Buffy, shake it by the neck, and run away with it, never to be seen again. He says that after the shock wore off, he decided to leverage his heartache into motivation to create something that would prevent similar attacks—the CoyoteVest.

Though it might seem like a punk-rock themed dog costume, according to the company’s website, owners Paul and Pam Mott, and Nicole Mellom, note that the vests are actually wrap-around Kevlar suits (made of the same puncture-resistant material worn by law enforcement) with 12, one-inch-long spikes around the colar to prevent neck bites. Optional add-ons include Coyote Whiskers, which are intended to ward off attacks by porcupines with quills, and even a Coyote Zapper—an electric, rechargeable, remote-activated shock collar that supposedly allows dog owners to “zap” an attacking coyote in the mouth without having to harm their pet.

“I’m trying to make the dog look bigger, and strange and weird,” Mott told radio station WDBO. “You want the coyote to scratch its head and say, “I think I should find another target.”

The fact is that as predator populations expand into urban areas, they’ve found that small domestic pets can be easy meals. In fact, details of a study recently released by the California Department of Fish and Wildlife report that a significant portion of culled mountain lions’ stomach contents were composed of domesticated animals.

“I think there’s even more people out there in the world that just want to make sure their dog is safe when they go to the dog park or dog beach,” Mott said.