Photosgraphs via Louisiana Bowhunter/Facebook A Louisiana deer hunter recently went from hero to zero when officials discovered that he didn’t... 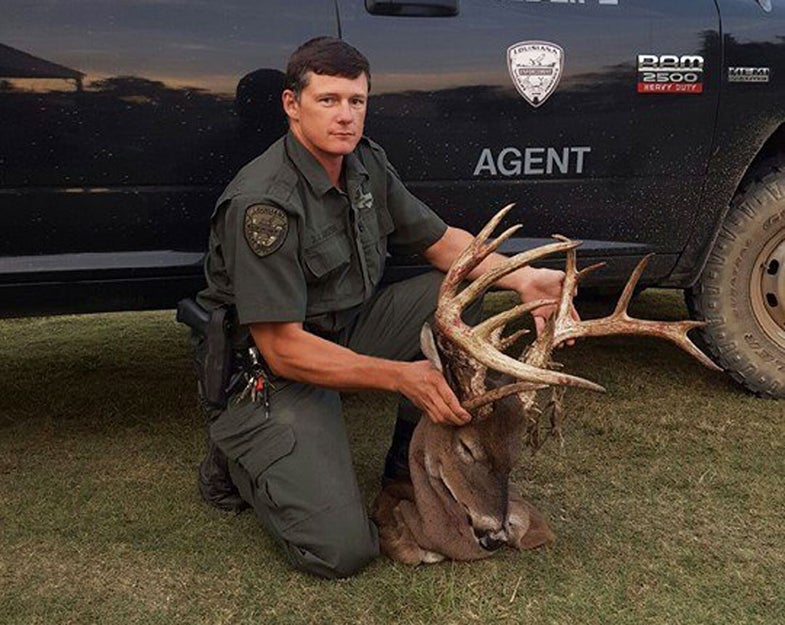 A Louisiana deer hunter recently went from hero to zero when officials discovered that he didn’t have the proper licenses or tags to harvest an 18-point whitetail buck, with an unofficial green score of 208 7/8 inches—a deer big enough to take a seat as one of the five largest ever harvested in the state.

According to The Shreveport Times, 40-year-old Glen Toups Jr. was hunting on property that belonged to an area hunting club when he harvested the giant buck on Saturday, October 17th. Toups was a visiting guest of the club, and after he killed the deer, another hunter called the Louisiana Department of Wildlife and Fisheries to verify the size of the rack. But by the time an LDWF official showed up, the group’s mood had already soured.

“When we arrived, all of them were hanging their heads and didn’t want to talk—the total opposite of the way they were when they called,” said Adam Einck of the LDWF. “They had figured out that Toups didn’t have a license. They all knew [the agent] and figured they might as well come clean.”

Toups admitted to illegally shooting the deer without a permit—but it was later learned that he wasn’t even eligible to purchase a Louisiana hunting license because of a previous infraction.

The deer was big enough to be the third largest non-typical whitetail harvested in the state, said Einck, but the state will not honor the score because the buck was killed illegally. To add insult to injury for Toups, the buck itself was somewhat of a local celebrity; over the years, other hunters had seen it on neighboring properties and captured photos of it on trail cameras.

Officials issued Toups citations, seized the deer, donated the meat to a local charity, and collected the head and antlers as evidence. If convicted, Toups could receive up to $3,000 in fines and restitution, and spend several months in jail.