One night in early May, Jonathan Randall, of Smithville, Mo., and two friends were bowfishing on Smithville Lake. The trio... 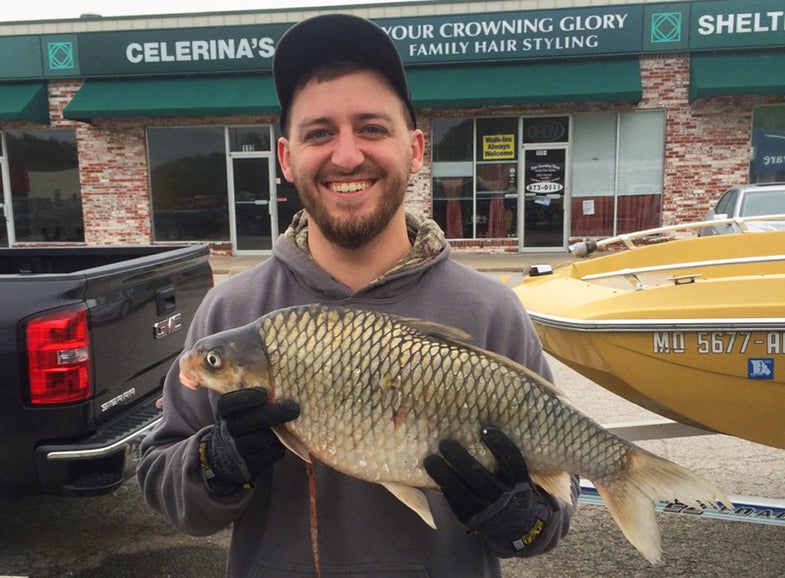 One night in early May, Jonathan Randall, of Smithville, Mo., and two friends were bowfishing on Smithville Lake. The trio had already shot 30 to 40 fish—common carp, mostly—when Randall spotted another fish in the water, drew his bow, and let the arrow fly. As he later told me, when he pulled the fish onto the boat, he could tell it was bigger than the others, but in the 4 a.m. darkness he assumed it was nothing more than a buffalo fish.

A couple hours later, Randall shot another buffalo fish—but it looked different from the first. The dawn light allowed Randall to compare the two: The first fish had a slightly lower mouth and smaller silver scales, whereas the second’s scales were bluish-gray. He then realized the first fish wasn’t a buffalo fish at all—it was a river carpsucker. A big one.

On Randall’s hand scale, the fish weighed 9 pounds, big enough to be a state-record catch—which Randall knew all too well.

In April, the Bowfishing Association of Missouri hosted a tournament on Lake of the Ozarks, during which Randall’s friend Alex Bennett shot a river carpsucker weighing 7 pounds, 7 ounces, beating the state record by about 2 pounds.

But just five minutes later, Bennett’s prized fish was meaningless when Jacob Tyler, a friend of Randall and Bennett who was also competing in the tournament, shot a 7-pound, 12-ounce river carpsucker. Tyler’s name would be the one going into the record books.

However, that night in May, just two weeks later, Randall realized he’d caught a potential record-breaker, so he and his friends put the carpsucker on ice and quickly headed to have it officially weighed. At the local Price Chopper, a conservation officer confirmed that Randall’s catch was the new record, at 9 pounds, 10 ounces, and 24 ¾ inches long.

Breaking the news to Bennett and Tyler didn’t faze Randall. “The bowfishing community is awesome,” he says. “Everybody is supportive of each other.” Accordingly, Bennett and Tyler congratulated Randall when they saw a photo of his record fish on Facebook.

Unfortunately for Tyler, he didn’t have enough time to find a taxidermist for his prize before Randall broke his record. So, it’s no surprise that Randall says he’s getting his fish mounted while he can. After all, there’s no telling how long his record will last.

“If someone breaks my record,” he says, “I’ll be happy for them, because I know how happy I was when I set mine.”