This fall, going hog wild on feral pigs may be a no-go on Missouri public conservation land. The Missouri Department... 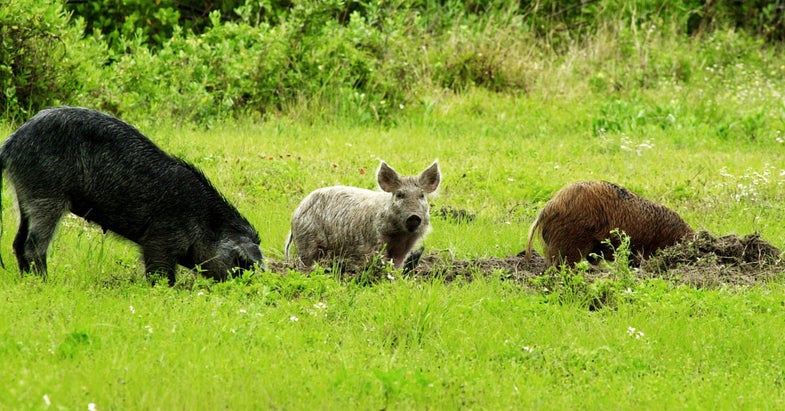 This fall, going hog wild on feral pigs may be a no-go on Missouri public conservation land. The Missouri Department of Conservation is proposing a ban on the state’s shoot-on-sight hunting program for feral swine.

The Springfield News-Leader reports that the state currently allows hunters to kill wild pigs on public conservation land at any time. The potential ban comes after the MDC concluded that its officers trapping dozens of feral hogs at a time is a more effective way to manage the invasive animals than hunters killing them is.

“I know the local boys want to hunt [hogs], but shooting tends to scatter them,” James Dixon, an MDC biologist, told the News-Leader. “We can have significant success with our trapping. Recently one of our traps got 30 out of 31 pigs.”

In 2015 alone, MDC officials trapped 3,649 wild hogs. As Dixon acknowledges, however, many area hunters like the shoot-on-sight program and are opposed to the ban. “If I see [wild hogs] when I’m deer hunting, I shoot them,” hunter David Karmi told the News-Leader. “The meat is excellent. A lot leaner than what you get at the store.”

Hog hunters have suggested forbidding shoot-on-sight only at certain locations rather than closing off all 1,000 Missouri conservation areas.

According to the MDC, each year feral hogs cause nearly $1.5 billion in damages in the U.S. Likewise, they compete with native animals for resources and can spread disease to humans.

Missouri isn’t the first state to consider such a ban: In 2014, New York State forbid hunting and trapping wild boars to “ensure maximum effectiveness of [the Department of Environmental Conservation]’s statewide eradication efforts.”

Missouri residents can comment on the proposed ban from April 2 until May 1. If approved, the ban will take effect on September 30.