With moose populations plummeting at an alarming rate, New Hampshire Fish and Game (NHFG) may put a stop to moose... 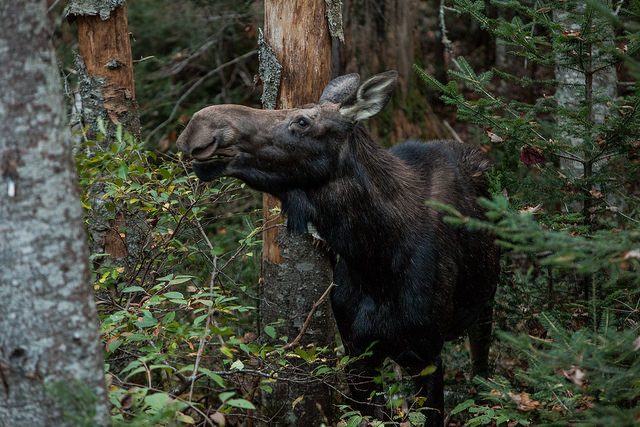 With moose populations plummeting at an alarming rate, New Hampshire Fish and Game (NHFG) may put a stop to moose hunts indefinitely. The issue is currently being debated by NHFG officials and local hunters as the state tries to determine a game management plan that will decide how many deer, turkey, bear and moose hunters will be allowed to shoot between now and 2025.

Biologists are concerned that warmer winters and hotter summers have lead to an increase in parasites that are drastically affecting moose across the state. According to the National Wildlife Federation, New Hampshire’s moose population has declined by more than 40% with total numbers falling from 7,500 to only 4,000 over the last decade and 64% of radio-collared moose calves died from tick overloads in 2014.

Kristine Rines, NHFG’s moose biologist, adds that deer and moose are not always compatible species and the influx of too many deer can be part of the problem, specifically in the southern part of the state where deer are thriving. She told New Hampshire Public Radio that, “Down here—down South, where deer densities are high—we believe brain worm is the primary influence on moose. From the White Mountains north, it’s primarily winter tick.”

For now, NHFG is considering establishing regional population thresholds that could end moose hunts should the herds continue to decline. The state has been divided into several moose management units in order to monitor the herds carefully. Currently, both the Central and Southwestern Units have low numbers while the Northern Units maintains healthy herds. Within the densely populated Southeast, because of current conflicts with moose, officials are not proposing a regional cut-off.

“The impact of hunting, compared to the impact of other things that have caused this decline, is fairly minimal. But certainly it’s something that we can change as human beings,” says Dave Poole of the New Hampshire Guides Association. The state uses a lottery system to award moose permits and many winners use guides to help harvest their moose, which means guides could also be economically impacted by the elimination of moose hunting.

For now, NHFG officials continue to gather public feedback on the game management plan, which will be presented to the NHFG executive director and the Fish and Game Commission for final review and approval in late spring or early summer.