Photograph via North Carolina Sportsman Something about the rack jutting from the head of what appeared to be a smallish-bodied... 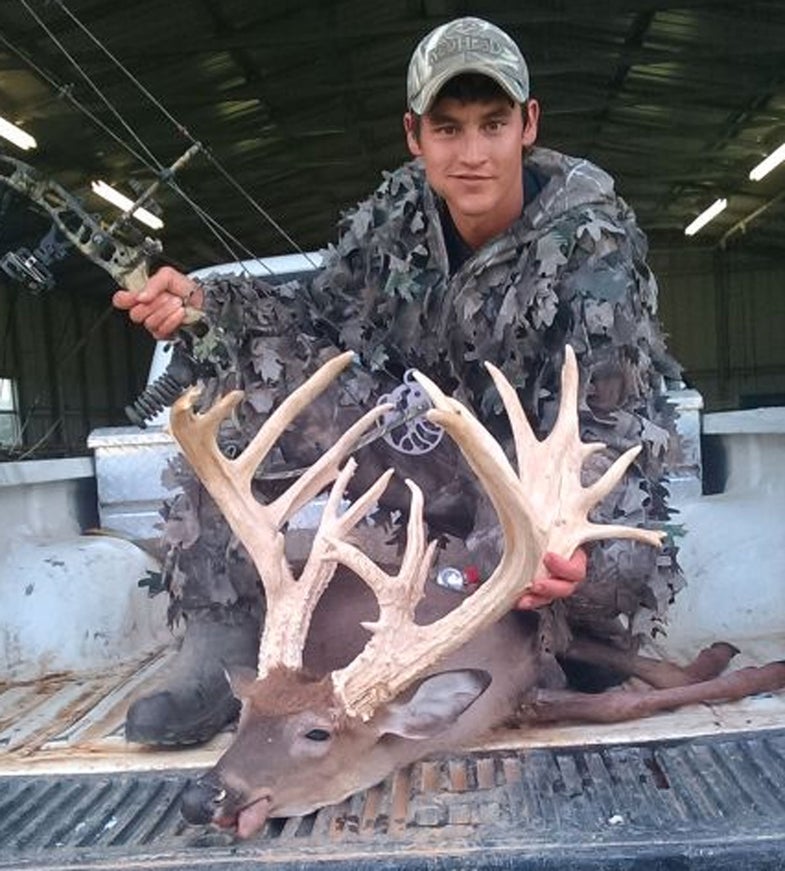 Something about the rack jutting from the head of what appeared to be a smallish-bodied deer seemed odd. The buck, killed by Nick Davis, of Elkin, North Carolina, was at first thought to be a new North Carolina archery non-typical record. Boasting a green score of 208 net inches, the gnarly antlers would easily topple the existing state non-typical archery record of 176 7/8. A deer of that size is possible in North Carolina, but the picture didn’t look right.

According to North Carolina Sportsman, Davis—a young, ambitious trophy hunter—had his first taste of success with mature whitetails last year. “When I killed those two bucks last year, people were telling me, ‘You’ll never kill another deer,’ because I won’t kill any buck unless it’s bigger than my biggest,” he said.

I had three more bucks as big or bigger than the ones I killed last year. And I was actually going after those deer; I didn’t know this one was around until two weeks ago. When I jumped him, I almost dropped the Weed Eater. I’ve never seen anything like him before. At that point, I started really working on him, finding his trails. I’d see the other three bucks together, and there were some bucks 6-points and smaller together, and all the does were together, but he was always by himself.

Davis said that he had been developing a formula for a mineral supplement to help grow buck’s racks. He claimed to have come up with the right combination in January 2014 and had been using it since. “[Deer] will come to it every day,” he said. “I take it away a couple of days before I’m going to hunt, and when I put it back out, they smell it and come running.”

According to Davis, shooting the 208-inch deer was rather anticlimactic: The bruiser showed up at 6:15, snuffling through the mineral. Davis shot the deer at 6:30 and found it after trailing it just 75 yards.

But something about Davis’s story seemed off, and North Carolina hunters began to cause commotion about the deer online. The ruckus on social media triggered an investigation by the North Carolina Wildlife Resources Commission, which, upon visiting Davis, got him to confess to the real origins of the deer: The antlers were sheds from a deer farm in Pennsylvania that he had purchased and screwed into the skull of a three-point North Carolina buck.

It was fancy and effective taxidermy, fooling even seasoned scorer Joey Thompson, who had initially measured the buck. After totaling the rack, Thompson—the official scorer for the North Carolina Bowhunters Association—had declared on Facebook that Davis’s deer would be the new state record, following the required 60-day drying period. It was a no-brainer for him.

According to North Carolina Sportsman, Davis also confessed to having shot the three-point buck illegally with a rifle.

After Thompson was informed of the hoax by NCWRC officials, he took to Facebook again:

I regret to inform you of the deer I took pride in measuring on Thursday was not a NC deer. I am very upset over this, as I felt it was legitimate and legal. I am very thankful [to] the NCWRC for the hard work and for protecting the deer we hunt. I want to apologize for the hunters of NC. …I’m in shock, and I’m sorry for misinforming NC of a potential state record.

Apparently, Thompson was so upset by the incident that he has taken a hiatus from scoring deer.

North Carolina Sportsman‘s most recent article on the Davis buck saga reports that the young man has been charged with four wildlife violations. According to Sgt. Brian Blankenship, of the NCWRC Enforcement Division, two charges are for killing the small buck with a rifle out of season, and two stem from a large buck Davis killed in 2014. The 2014 buck was never tagged or registered with NCWRC. “This was one of the more interesting investigations I’ve ever been involved with,” said Blankenship, a 20-year veteran of the NCWRC. “We spent a long time investigating this. We took all the stuff we had and put it together, and then we went and interviewed (Davis).”

Blankenship also said that Davis did a meticulous job attaching the shed antlers to the small buck’s skull. “Joey Thompson has been catching a lot of flack for something that was not his fault,” said Blankenship. “It would have been very hard for a normal person to ever see what was wrong, how the horns had been attached to the skull cap. All of us looked at it, and none of us caught it until (Davis) confessed, then when we knew what we were looking for; we could see it, but it was doctored up really well.”

Blankenship said the charges usually amount to about $250, but judges can take a violator’s hunting license and charge deer-replacement charges of $604. Davis’s court date is set for Jan. 28, 2016.