Photo via Your Wild Ohio/Facebook Last week, a hunter in Ohio reportedly harvested one of the largest whitetail deer ever... 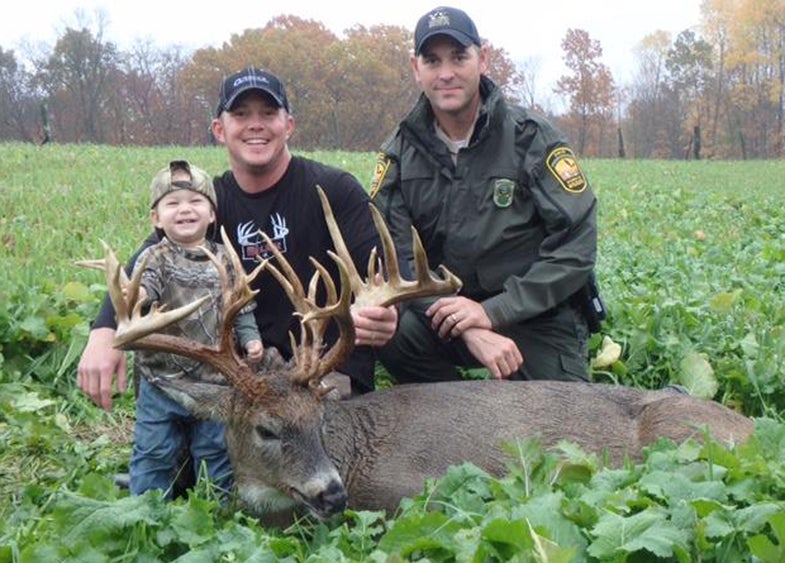 Photo via Your Wild Ohio/Facebook

Last week, a hunter in Ohio reportedly harvested one of the largest whitetail deer ever taken by a hunter, which has inadvertently launched a social-media firestorm that has people questioning the deer’s authenticity.

The hunter is Dan Coffman from Junction City, Ohio, a small community east of Columbus in Perry County. It’s believed that Coffman was hunting in neighboring Fairfield County the evening he shot the deer, on October 27th. Rumors about the size and legitimacy of the buck are already scattered across the Internet, especially in light of a recent ruse in North Carolina in which a hunter tried to pass off a fabricated deer rack as a new state record. Some say Coffman’s deer may gross more than 300 inches, though others say it’s not large enough to best Pope & Young’s current world-record non-typical—the infamous Beatty Buck, another massive Ohio whitetail taken by hunter Michael Beatty in 2000. The website Legendary Whitetails estimates the green score of the Coffman buck at 286, just shy of Beatty’s 294.

To Coffman’s credit, however, he has posted several images online, including one with Ohio Department of Natural Resources officer Tony Zerkle, which has helped silence some critics who say that the deer was not free range or was harvested illegally. The Facebook page Your Wild Ohio posted the image and credited Coffman’s success to his relentless preparation: “When Coffman realized he may have an opportunity to harvest the deer, he contacted [Officer Zerkle] in the months leading up to the season,” a post from October 30th reads. “He advised him of the potential harvest and most important, he contacted the neighboring landowners and built trust so he may be able to retrieve the deer if needed. That preparation paid off when he got permission to retrieve the deer from a neighboring property.”

The fact is a lot of information about Coffman’s buck and its possible position in the Pope & Young record books remain unknown—and how Coffman scouted, hunted, and harvested the buck might remain a mystery for some time as well. According to a post on Coffman’s Facebook page, The Break, a hunting show that airs on The Hunt Channel and features Coffman, is scheduled to air an episode about the buck in July or August of 2016.

“To everyone who is following the story of this new journey that I was blessed with, thank you very much,” Coffman wrote. “I’m honored and very excited for this. I have been getting a lot of detail information questions about my hunt and ‘The Coffman Buck’ [sic]. Man, this is such an exciting thing for me to say! But either way, as much as I want to tell everyone and share this now, I’m unable to, so that we, ‘The Break,’ can give you the best show possible.”