John Bailey was walking on the beach at Sebastian Inlet State Park in Vero Beach, Florida, on April 6 when... 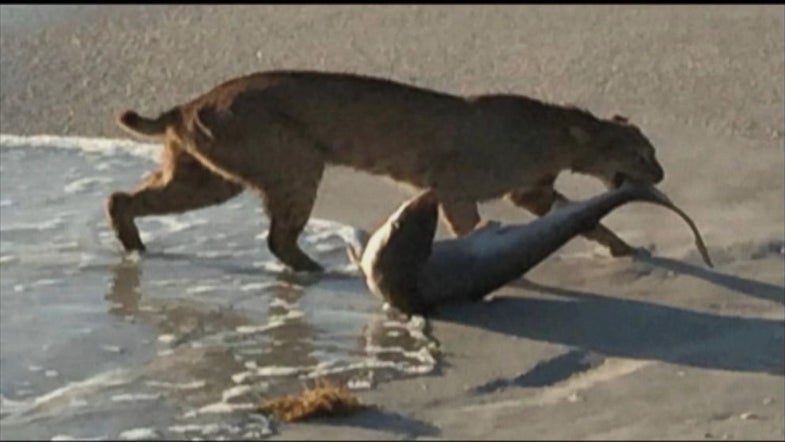 John Bailey was walking on the beach at Sebastian Inlet State Park in Vero Beach, Florida, on April 6 when he spotted a bobcat fishing in the waves. The cat pounced, and Bailey was able to use his iPhone to capture this picture of the bobcat pulling a 4-foot shark out of the water. Whether alarmed by Bailey or by the struggling shark, the cat dropped its catch and ran into the nearby woods.

The photo has gone viral and, like any viral picture, its validity has been questioned. Liz Barraco, spokesperson for the Florida Fish and Wildlife Commission told National Geographic: “We have no reason to believe [the photograph] is a fake,” although she notes, “this is the first time we’ve seen them fishing in saltwater.”

Seth Riley, a UCLA wildlife biologist who studies bobcats, said he has never seen anything like this, although, “[it] doesn’t surprise me.”

If indeed the photograph is real, as the experts say it seems to be, it sheds a little light on the lion vs. tuna question debated by Mark Wahlberg and Will Ferrell in “The Other Guys.”