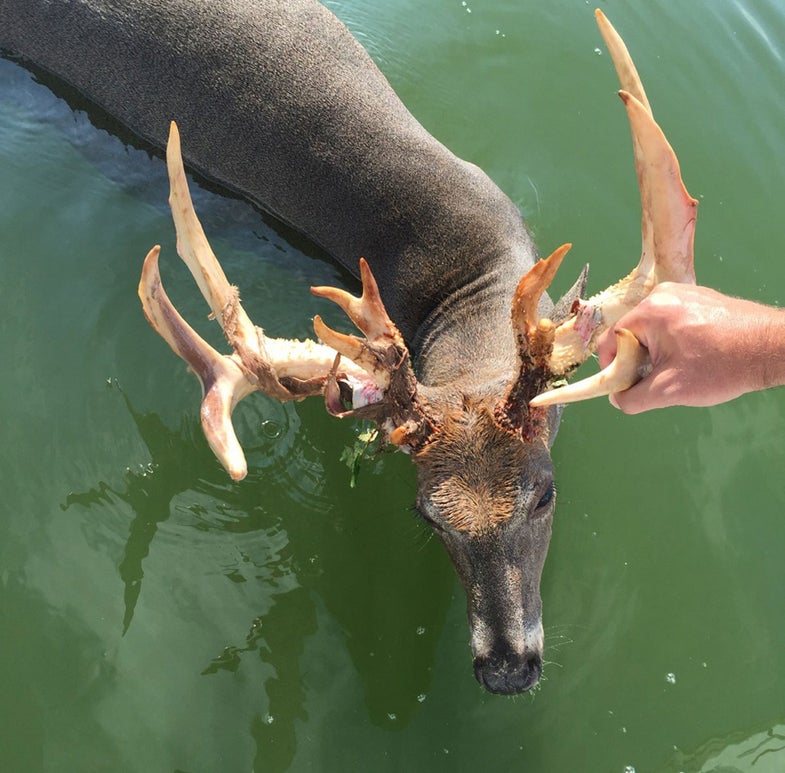 Earlier this month Steven William Timm, of Moorehead, Minnesota, allegedly pursued and pestered a buck swimming across Tulaby Lake with a pontoon boat until the animal drowned from exhaustion. As DL-Online reports, Timm claims, however, that he was only trying to help the deer back to shore. Witnesses say otherwise, noting that it appeared as if Timms was purposefully preventing the deer from reaching land.

In an interview with the Star Tribune, witness David Kvidt said “the deer was swimming faster than heck” as Timm chased it by boat. Kvidt was taking photographs of the incident but decided to intervene and jumped into his own pontoon to confront Timm. “It probably took 20 seconds to get to him,” said Kvidt, “but by then the deer had turned upside down.”

Furthermore, Kvidt said the deer was heading straight for the public landing until harassed by Timm. “[Timm] just got all excited,” said Kvidt. “You can see him in two or three of my pictures holding up a camera trying to take pictures or video.”

When confronted by Kvidt, Timm said that he wanted only to see what was swimming across the lake. Then, according to Kvidt, Timm added “What do you think I am, a deer killer?”

Both men were angry, and Kvidt boated back to his lakeside residence. Another boater pulled the dead deer to shore and Minnesota Department of Natural Resources then investigated the scene, eventually questioning Timm after he was identified as the person seen chasing the deer.

In the DNR report, Timm stated that he “drove the pontoon between the deer and shore while trying to get around the front of the deer to turn it back to shore.” Other witnesses came forward to refute Timm’s claim and Minnesota DNR charged Timm with two misdemeanors: animal cruelty and chasing a wild animal in a motor vehicle for the purpose of hunting.

A hearing is scheduled for Oct. 29. In an interview with 5 Eyewitness News, DNR conservation officer Bill Landmark explained the charges. “Anything that’s driven by a motor, you can’t use that to chase, harass, run down, or take a wild animal.” Landmark said that other charges and fines could be issued as well.” Restitution for a deer, for example, is $500 and then it goes up from there if it is a trophy animal,” said Landmark.