One YouTube user went to a lot of trouble recently to doctor a GoPro video of his bike ride so... 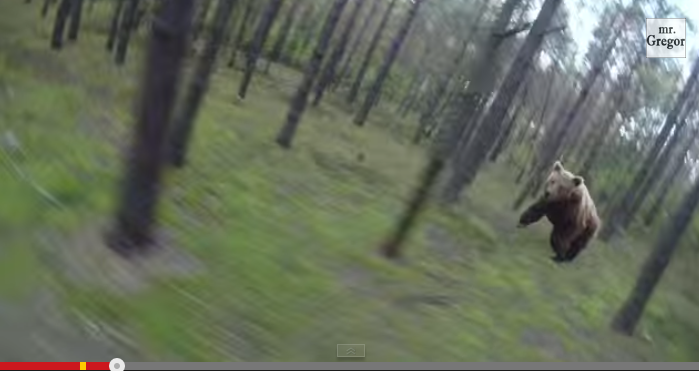 One YouTube user went to a lot of trouble recently to doctor a GoPro video of his bike ride so it would seem like he was chased by a bear. On the one hand, the video is getting a lot of social media attention, but on the other hand, it didn’t take long for people to point out that it’s a fake. It’s possible, however, that the amateur CGI artist was inspired by a real-life cyclist’s encounter with a bear captured on film last year.

YouTuber mr. Gregor posted the debunked video on Nov. 1 with a caption reading, “It was a usual day, I decided to cycle in the forest and to record my walk on the Gopro. To my great surprise, I met a bear.” He goes on to suggest that he only escaped the bear because shots fired in the distance scared the beast off.

In the clip, he spots the bear, pedals hard to put distance between them, and frantically looks behind him a few times to glimpse the bear in pursuit. He is seemingly forced to get off his bike, when a downed branch blocks his path, and runs a short distance away on foot. Soon after, you can hear the shots mentioned in the caption, and see the bear, perhaps 15 yards away, sauntering off.

When the clip was posted to Reddit five days ago, site users quickly posted screenshots that show the bear is the only thing in the video not affected by motion blur, according to MTV News, and clearly added during (low-budget) post-production. However, Mad World News suggests mr. Gregor was inspired by a video of an actual bear encounter (as far as they know) between two cousins and a grizzly sow on a trail in Jasper, Alberta, in Aug. 2013.

The cyclist wearing the GoPro rig in this clip reacts more reasonably than mr. Gregor’s rider—by yelling out in surprise and taking a harsh turn off the trail, where he crashes into a log downhill. But, ironically, the clip has less drama with only one clear glimpse of the bear. Watch both videos below.