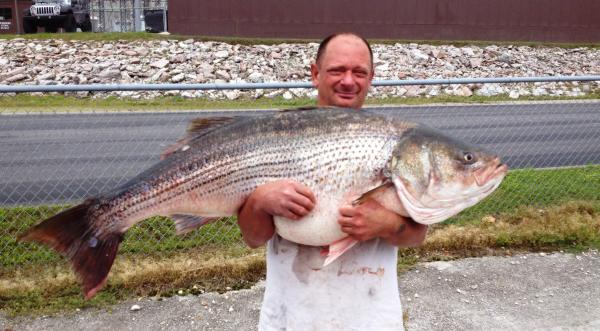 Lawrence Dillman, an angler from Rockaway Beach, Missouri, broke the state’s striped bass record with a 65 pound, 2 ounce fish he caught while fishing Bull Shoals Lake on May 21.

A press release from the Missouri Department of Conservation (MDC) says Dillman was fishing with chub minnows and 20-pound test line when he hooked into the trophy—a fish that beats the old state striper record by five pounds.

“I fought the giant for over 45 minutes until I got him in shallow water,” Dillman said. “I then bear hugged the fish and got it out of the water on to the bank.”

MDC personnel verified the weight of Dillman’s fish on a certified scale and said it will be recognized in the “pole-and-line” category, as opposed to the state’s “alternative method” category which includes records for fish caught with trotlines, spears, or bowfishing gear.

“Once the fish was on the line, I knew I had a decent one, but I didn’t at all think it was a striped bass,” Dillman said. “I thought it was a spoonbill or something else. But when I got him to the bank I knew I had something amazing.”

The IGFA world record for striped bass stands at 69 pounds, 9 ounces and was caught in Alabama’s Black Warrior River in 2013.