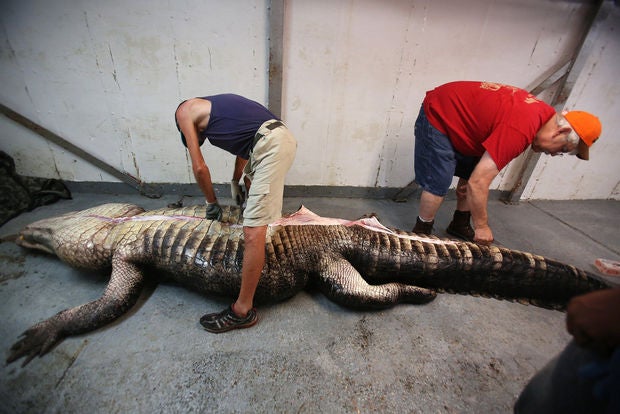 According to a story from the Huntsville Times, Owens dissected the gator’s intestines at the request of biologists, who were curious about what such a large animal eats. When he pulled on the ears, out came a fully intact, albeit slightly deteriorated, adult female deer. The gator caught and ate the animal whole sometime in the week prior.

“I always thought that once an alligator killed something that it ate it a piece at a time,” Owens told the Huntsville Times. “I can’t imagine how it got ahold of that adult deer and ate it in one piece like that. It’s unbelievable.”

Reptilian biologist Dr. Kent Vliet said alligators typically tear food into pieces that fit into their mouths, but the Stokes gator was able to eat an adult doe, which average 115 pounds, in one bite.

Owens spent 2 ½ hours skinning the gator and preparing the skin for tanning though the full mount won’t be done until sometime next spring.