Photograph courtesy of Tad Sherman/Facebook A 10-year-old boy from southwest Idaho is going to have one heck of a show-and-tell... 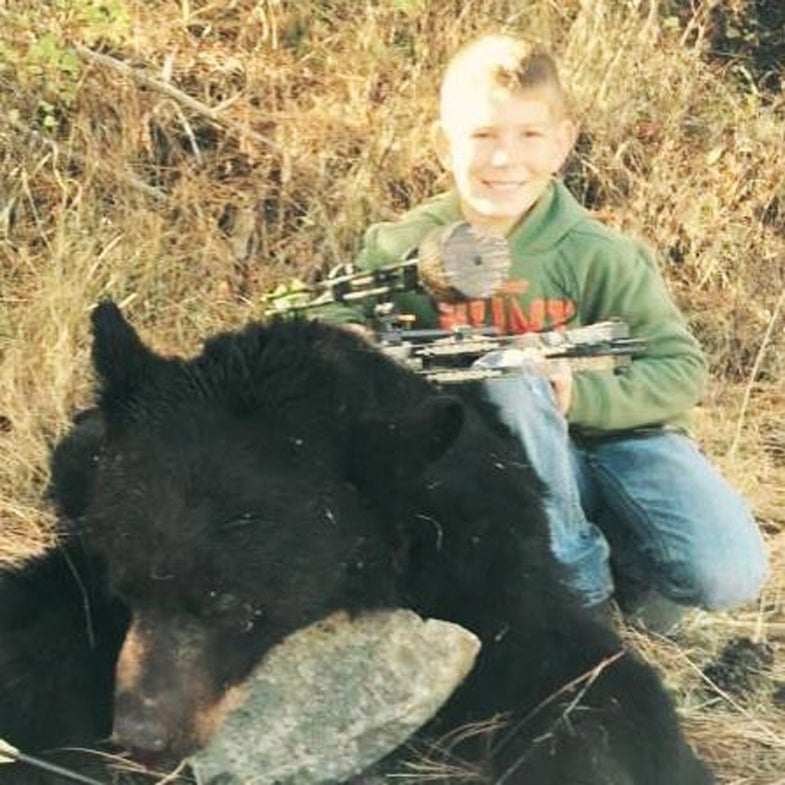 A 10-year-old boy from southwest Idaho is going to have one heck of a show-and-tell this fall. The Idaho Department of Fish and Game announced this week that first-year bowhunter Sam Sherman killed a black bear that might be the biggest harvested in Idaho this year. Likewise, the bear may qualify for status in the Pope & Young Club, which requires an 18-inch skull measurement to be eligible, as the Spokesman-Review notes.

“We won’t know for a while yet,” says Tad Sherman, Sam’s dad, about whether the bear will qualify for Pope & Young. “The skull has to dry for at least 60 days before taking the official measurement, but the green score was 19 and 13.81 inches.”

According to IDFG, Sam shot the bear while hunting on a ranch in Goodrich, with his father, brother, and a family friend, in September. IDFG referred the hunters to the ranch after landowners Arnie and Sharon Pederson reported multiple bears causing problems there. “When hunters started calling, asking where they might find bears, we put them in touch with the Pedersons,” says Anna Owsiak, an area manager with IDFG.

Both Sam and his brother had bear tags and planned to hunt with bows and hounds unless a bear wouldn’t tree—then they’d hunt with rifles so they could keep a safe distance. During the hunt, though, hounds pushed the bear out of a river channel, and it climbed a ponderosa tree. Sam then drew his bow and released an arrow, and the bear fell.

Sam’s bear is more than 6 feet long and weighs 400 pounds. Interestingly, Sam’s dad holds the title to Idaho State Bowhunters Best of Species 2014 for black bear, which Sam hopes to claim for 2015.