Brooke Bateman, 14, of Dallas, killed one of the rarest trophy whitetails in North America on November 21: an all-black,... 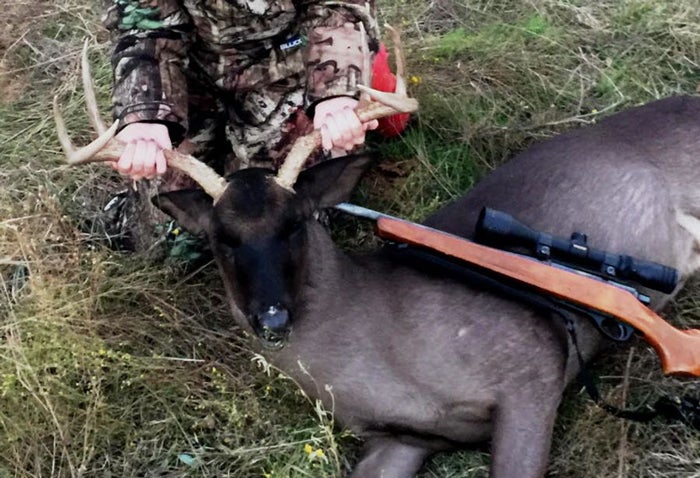 Brooke Bateman, 14, of Dallas, killed one of the rarest trophy whitetails in North America on November 21: an all-black, melanistic six-pointer. She was hunting with her father, Mike Bateman, on his lease in Stephens County, Texas, when they spotted the deer, which was Brooke’s first to harvest.

At first, Mike thought the deer was an Angus calf. But once he identified it as a deer, he faced a dilemma: The buck was a six-pointer, and the lease has an eight-point minimum. Bateman called another hunter on the lease, and the two decided that Brooke should take the shot at the rare deer, the Dallas Morning News reports.

They made a good decision. According to the Dallas Morning News, the annual deer harvest in Texas numbers 600,000 deer, and some years, only one melanistic deer is killed. Many years none are shot. Nationwide it’s estimated that fewer than five are harvested each year.

Melanistic deer—which overproduce melanin, the pigment that turns their hair black—are much rarer than all-white or piebald deer. Melanistic deer have been recorded in 29 states. According to North American Whitetail, the Edwards Plateau in Texas, which lies south of Stephens County, produces more melanistic deer than any other part of the country. Researchers John T. Baccus and John C. Posey, who study melanistic deer on the Edwards Plateau, believe that the dark coloration may actually help whitetails blend in with the thick cover.

Brooke has been hunting with her father since 2011. Last year she missed a doe, but she made this 120-yard shot count. “It was nerve-[w]racking, but I knew I could do it,” she told the Dallas Morning News. “At first, I was so excited that I couldn’t pull the trigger. Dad helped me calm down with deep breaths. I found the deer in the scope again, took a deep breath, and shot. The deer fell over backwards. It was awesome.”

Photograph via the Dallas Morning News