A warden with the deer. Photograph via the Three Affiliated Tribes Fish and Wildlife Department. Earlier this month, a large... 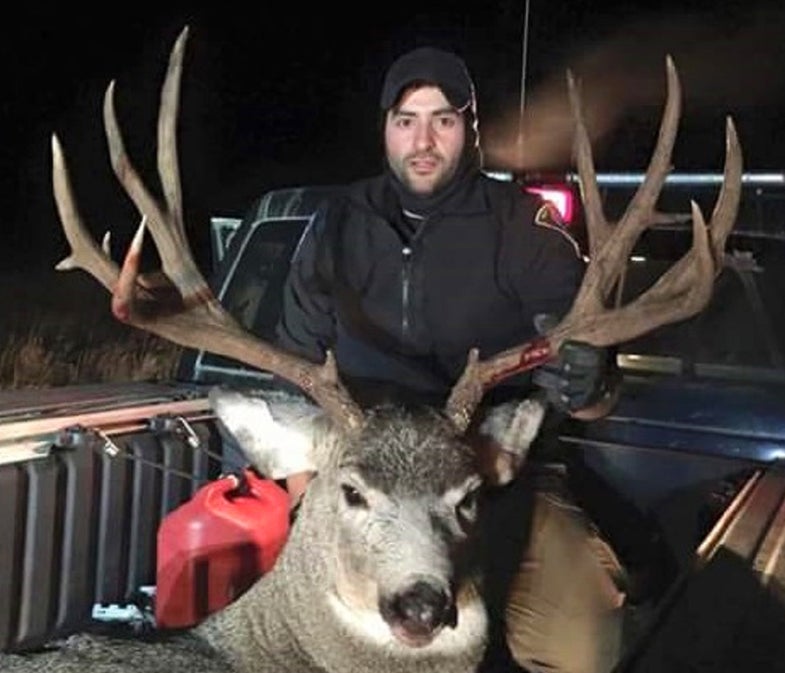 A warden with the deer. Photograph via the Three Affiliated Tribes Fish and Wildlife Department.

Earlier this month, a large mule deer buck was killed by a yet-to-be-identified poacher and left on the Fort Berthold Indian Reservation, in North Dakota. It’s unclear whether the buck—which, given its size, may have potentially qualified for a state record—was the result of thrill killing or if the poachers were simply unable to recover it. Because the incident occurred on tribal lands, officials with the North Dakota Game and Fish Department (NDGFD) and the Three Affiliated Tribes Fish and Wildlife Department (TATFWD) are now trying to figure out who’s responsible.

Poaching has, unfortunately, been on the rise across parts of North Dakota. According to the Grand Forks Herald, the number of poaching incidents—and hunting violations, in general—have consistently increased over the past six years, with 2,712 hunting, fishing, and trapping violations in 2014 alone. And, according to Dakota Country Magazine, many of the poaching incidents go unsolved due to a lack of information provided by the community.

It’s of note that the mule deer was found with its head intact, as often only the bodies are recovered. Though non-residents are permitted to hunt on reservation land during archery deer season, rifle deer season is open only to tribal residents, and state hunting licenses are not valid on the reservation at all. Because the buck was killed on reservation land, the TATFWD will lead the investigation, with assistance from the NDGFD. There is a $1,000 reward for any information leading to the poacher’s arrest. Tips can be relayed via the state’s Report All Poachers telephone number: 1-800-472-2121.