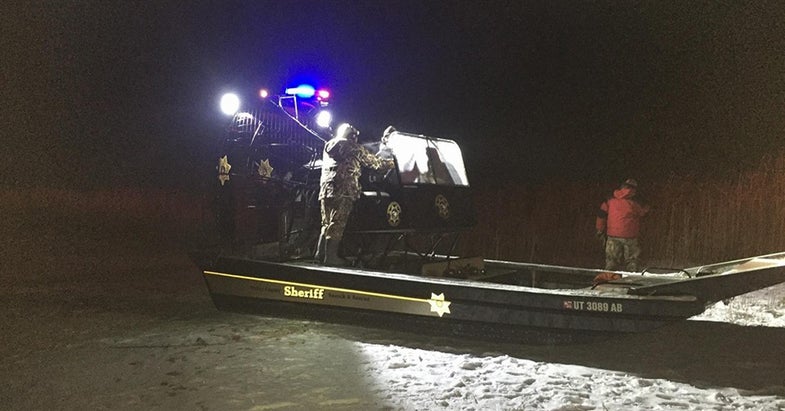 On Saturday, December 26, 14-year-old duck hunter Brayden Neilson went missing in the Ogden Waterfowl Management Area, in Ogden, Utah. Separated from his friend, Neilson found himself lost in a marsh, the air pitch black and the temperature soon at only four degrees. As the night progressed, the hypothermic cold became so severe that Brayden started hallucinating, FOX 13 reports. “I was just seeing black sometimes,” Brayden said. “I started to see people, like, everyone was in Halloween masks just sitting there by the bush, and I’d walk towards them and it was a tree.”

Brayden also felt like his body was shutting down, he later told FOX 13. Luckily, he had a cell phone, but his calls home sounded garbled and confused, offering little insight to his whereabouts. His phone eventually died, but not before rescue crews used his calls to determine his location; however, they couldn’t pinpoint his exact coordinates. Helicopters, using infrared, tracked Brayden’s sled containing his supplies, but Brayden himself remained missing in the dark and the brutal cold.

He was found at 6 a.m. that Sunday morning on a Davis County causeway, 50 miles from his home. Neilson later told ABC News: “I really thought I should’ve been dead…I saw two pairs of headlights. I started walking to them. I think God led me that whole way through, all the way through there and I think he found me some help.”

Lieutenant Lane Findley of the Weber County Sheriff’s Department said Neilson owes his survival to wearing proper, warm hunting gear. The teenager is now recovering from hypothermia and frostbite, and processing his fragmented memories of his struggle and subsequent rescue. His mother told FOX 13 that upon entering the back of an ambulance with her son: “It was like giving birth all over again, I’ll tell you that. It was the most joyous reunion, I couldn’t even tell you.”