Parachuting beavers—animals sent to help nurture other forest-dwelling mammals. It sounds like a fictional Disney story, but an old film... 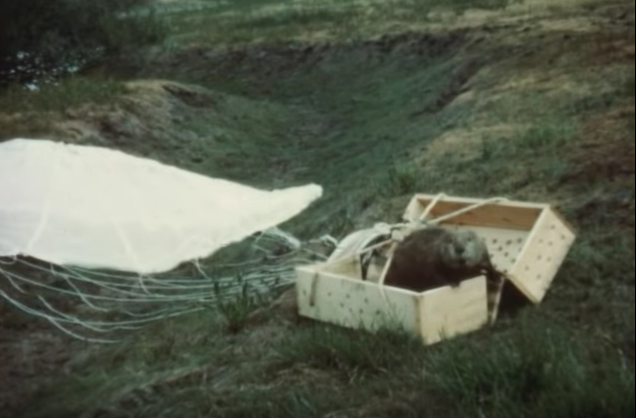 Parachuting beavers—animals sent to help nurture other forest-dwelling mammals. It sounds like a fictional Disney story, but an old film from the Idaho Department of Fish and Game (IDFG), recently digitized and uploaded to the Internet, confirms that this indeed happened.

The Alaska Dispatch News reports that the idea was to disperse the animals throughout the Frank Church River of No Return Wilderness, where the beavers would then find their way into various drainages, build dams, and help foster the habitat for other species, such as deer, elk, and moose.

The idea emerged after World War II when beavers were becoming a problem in the resort town of McCall. The IDFG wanted to move the beavers to remote areas, but many of these places were nearly impossible to reach by anything but an airplane. That’s when conservation officer Elmo Heter got the idea to strap a parachute on a beaver named Geronimo.

Heter designed a box to carry a beaver that sprung open when it landed, and with the war over, he had access to surplus parachutes. After a series of tests, Heter was satisfied with his “delivery method,” and Geronimo was the first beaver dropped from the sky.

The beavers themselves, 75 total after Geronimo, were each “nuisance” or “problem” beavers captured by the IDFG for destroying private property.

The IDFG called the program “Fur for the Future,” and it was featured in a Time magazine story. The economics even made sense—it cost the state around $8 per dropped beaver, but the animals performed about $300 worth of labor.

Though the IDGF still relocates problem beavers, they no longer give the animals first-class tickets. “Yes, we still do some trapping and relocating of beavers,” says Steve Nadeau of the IDFG. “We haven’t done airplane drops for 50-plus years, but it apparently worked pretty well back then to reestablish them in remote places.”