A new video circulating the Internet shows a wildlife conservation office in a standoff with a large cougar caught in... 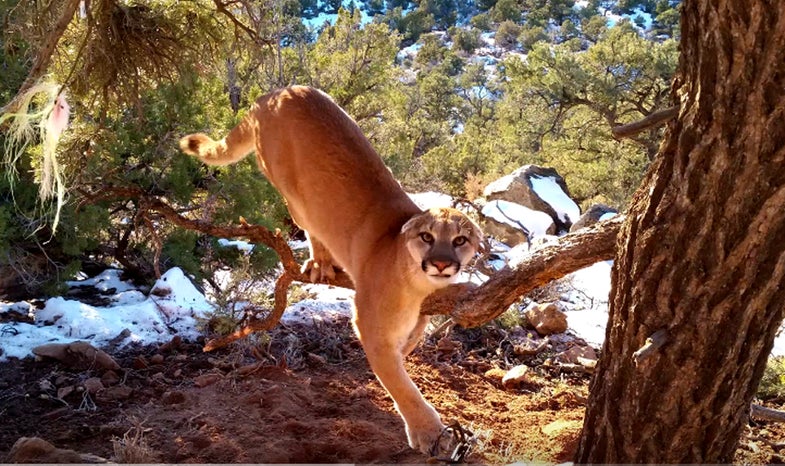 A new video circulating the Internet shows a wildlife conservation office in a standoff with a large cougar caught in a trap. According to ksl.com, Utah wildlife conservation officer Mark Ekins was called to help release the cougar on December 17 and decided to film the encounter because of the animal’s size. The footage, uploaded to YouTube just this month, shows Ekins slipping a catchpole over the cougar’s neck and then working with a trapper to release it. At one point, the cougar leaps as Ekins reaches for its paw, snapping a tree limb the men were using to control it. Ekins then calmly grabes the pole, which is only a few feet long, and calmly reins in the frantic cat. Ultimately, Ekins throws a blanket over the cougar and releases its paw, and after a moment, the animal sheds the blanket and runs away, shaken, surely, but with only a small cut on its paw.

It was purportedly all in a day’s work for Ekins, who says that a healthy respect for the animal helps him stay safe when releasing large cougars. He told ksl.com, “I’m nervous and I’m extremely careful when doing it. …I’ve probably only done three in my career that were as big as the one you saw.” Typically, he said, large cougars can free themselves from traps, but occasionally officers are needed. Ekins said that tranquilizers are preferred to catchpoles in these situations, but the drugs aren’t always available in remote areas.

According to the Utah Division of Wildlife Resources trapping guide, cougars must be released unharmed, and authorities are to be notified within 48 hours. Despite the restrictions on trapping cougars, it’s legal to hunt them in certain parts of the state.