In addition to destroying thousands of homes, Canada’s Fort McMurray fire has threatened nearly 600 different species of wildlife as... 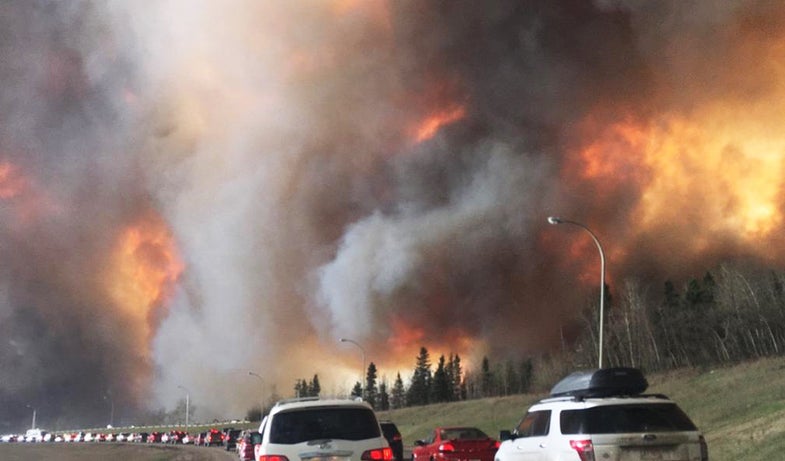 In addition to destroying thousands of homes, Canada’s Fort McMurray fire has threatened nearly 600 different species of wildlife as it continues to rage. According to Maclean’s, the massive fire has put 587 different wildlife species, ranging from large animals, such as moose, down to spiders and slugs, at risk. Colin Weir, director of the Alberta Birds of Prey Society, said, “There’s wildlife that [is] going to be just incinerated. I’m sure we’ll have tens of thousands of losses.”

As Globalnews.ca reports, Lu Carbyn, an expert in wolf biology, and a professor at the University of Alberta, agrees with Weir’s assessment. “There’s not very much that can survive those fires,” he said.

It’s impossible to determine the exact number of animals that have been placed at risk, but a warm winter has likely increased the mortalities. Maclean’s reports that the Alberta Institute for Wildlife Conservation, which cares for orphaned wildlife, has seen an 86 percent increase in admissions compared with those of this time last year, since many animals have migrated back to their summer grounds earlier than they had in the past. Holly Duval, the institute’s director, said that the animals had even begun breeding; nesting animals and those with young are greatly encumbered in their attempts to escape the fire, likely increasing the losses.

Todd Zimmerling, president of the Alberta Conservation Association, told Maclean’s that birds, with superior vision and hearing, stand the best chance of escaping the blaze, but smaller animals, such as porcupines or squirrels, have slimmer odds. Burrowing animals, Zimmerling says, would have simply trapped themselves in their dens. “We may end up with animals cooking in the burrows, unfortunately,” he lamented.

Despite the fire’s destruction, Carbyn said that the forest will recover fairly quickly. “As the vegetation regenerates, certain species will benefit from that regeneration,” he said. “In terms of hoofed animals… huntable animals, the moose and the deer will do quite well at the beginning.”