Wisconsin May Legalize Blaze Pink to Encourage Women to Hunt

With the number of female hunters growing, Wisconsin legislators have decided that the next logical—if not somewhat misguided—step in the... 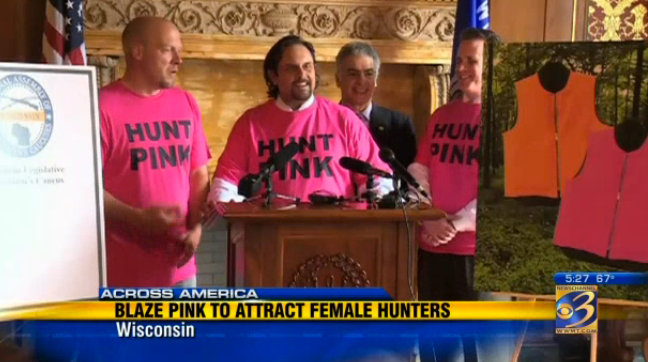 With the number of female hunters growing, Wisconsin legislators have decided that the next logical—if not somewhat misguided—step in the continued recruitment of women is to add blaze pink clothing. Sen. Terry Moulton, co-chairmen of the state legislature’s sportsmen’s caucus, is leading the charge. The sportsmen’s caucus, which was formed last January, is a bipartisan group of legislators who focus on outdoor issues and plan to unveil a new bill to legalize blaze pink for deer hunters this week, according to the Star Tribune.

Moulten wrote in a column last week in the Dunn County News that the blaze pink bill will encourage women to become hunters and keep them involved in the sport. According to the Wisconsin Department of Natural Resources, female hunters made up about 10% of the state’s gun deer hunters in 2014, 2013 and 2012 and accounted for about a quarter of all hunters between the ages of 10 and 12 in 2014. Females also bought 35% of the new gun deer licenses last fall.

“Where is this coming from?”asks Jeff Schinkten, president of Whitetails Unlimited. “A guy in blaze orange sticks out like a sore thumb. If blaze pink does the same thing, great. I like the idea that we’re catering to the women to get them into the sport … but I’m more about safety than fashion.”

Ask any female hunter why she hunts and I’m guessing that it’s not because of the clothing. Instead, she may tell you that not only is hunting an empowering skill to learn, but it is also a way to control where her family’s food comes from as well as a great way to spend time with family and friends. Perhaps a better idea would be to create more events and opportunities for women to learn about hunting and outdoor skills, instead of focusing on a hunting recruitment fashion initiative. Personally, as a female hunter, I’d like to see our clothing accented in a color other than pink.