The last few moments of a grainy webcam video taken in Yellowstone National Park have Bigfoot believers excited. Some are... 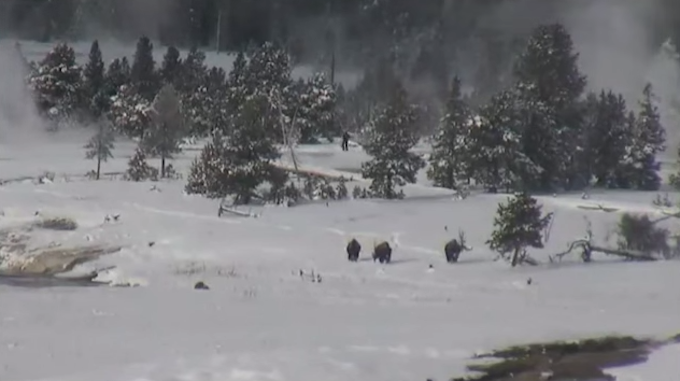 The last few moments of a grainy webcam video taken in Yellowstone National Park have Bigfoot believers excited. Some are analyzing the appearance of large human-like forms and suggesting that Sasquatch has been hunting bison near Old Faithful Geyser for ages.

The clip, posted to YouTube by Mary Greeley in December, shows a small herd of bison mingling around Old Faithful—a scene that anyone with the Internet can view on the National Park Service’s webcam page. The camera frequently zooms in and out and pans from side-to-side to give visitors variable views. What has caught the attention of Bigfoot enthusiasts is the movement of dark figures, what some are calling “ape-like creatures,” behind the bison during the last 30 seconds of the clip.

While it’s easy to assume that the forms are human—possibly snowshoers, skiers or park personnel—Bigfoot enthusiasts see something else. “Are we witnessing some ancient scene that has been going on for thousands and thousands of years? You decide,” posts a user by the name of ThinkerThunker, who breaks down elements of the video on his own YouTube page.

Al Nash, a spokesperson for the Park, says Bigfoot sightings inside Yellowstone occur from time to time. “Bigfoot sightings are not frequent, but it happens,” Nash told ABC Montana. “People say a lot of crazy things about Yellowstone all the time and Bigfoot is just one of them.”