You probably know LINE-X as a spray-on bedliner company. That’s how I know them, and I’ve used their products over... 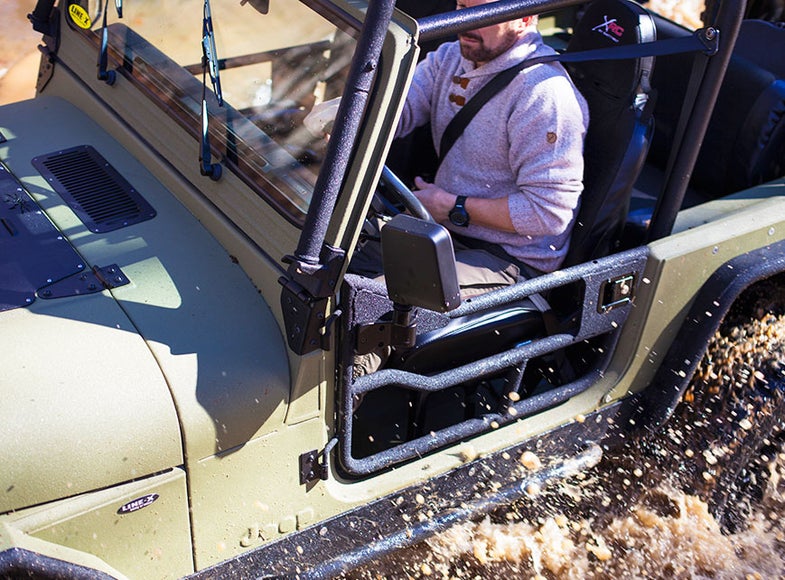 Craig Morgan takes his "restored" Jeep through a mudhole.
SHARE

You probably know LINE-X as a spray-on bedliner company. That’s how I know them, and I’ve used their products over the years to protect the beds of pickup trucks intended to spend a lot of time in the field. But the company is more than that. Recently, I met with LINE-X president Dennis Weese who wanted me to see a new product line. It’s called LINE-X Body Armour, and at first glance it looks like a heavy-duty vehicle “wrap.”

The new Jeep that I saw was gussied up for trade shows. When I ran my hand along the body panels, the rough, slightly raised texture of the Body Armour reminded me of the tough hide found on some dangerous game species. When I asked about hunting and fishing applications, Weese smiled and said, “We’ve got just the vehicle for you.”

“Here’s a guy who can buy just about any truck he wants,” said Weese, “but his favorite is that old Wrangler. He is so attached to it that the first chance he had to work with LINE-X–he’s been a long-time fan of our product line–he insisted we needed to help him ‘restore it.’”

By restore, Morgan didn’t mean fixing it up for show. He still wanted a truck that he could hunt with.

This is what the 1994 Wrangler looked like before the LINE-X began work.

“When we received the Jeep, our team discovered it had been beaten down by wear, tear, and extreme use,” Weese said. “The Jeep was literally holding on for dear life.”

So, challenge accepted, the LINE-X team went to work. First, a new frame, tub, axles, and suspension were installed. After that, the accessories were upgraded to reflect Morgan’s preferences. Finally, the roll bar, congo rack, safari basket, front and rear bumpers, rock sliders, wheel wells, and the underside of the tub were coated in LINE-X PREMIUM for future protection from the elements and impact. LINE-X ULTRA (a smoother, aesthetically pleasing and UV resistant version of LINE-X) now coats the full body of the Jeep in OD Green.

“The Jeep now features impact-resistant, watertight, easy-to-clean, consistent surfaces with LINE-X Body Armour,” said Weese. “The first time Craig saw the completed Jeep on his farm in Tennessee, he jumped around like a kid in a candy store.”

To me, the benefit of Body Armor is that any outdoorsman with a truck that’s going to see a lot of tough country won’t have to worry about the inevitable nicks and scratches that come with the territory. The coating also allows for quick clean up after muddy trips as well.

“Our products are being used in several different military applications like ballistic armor plates, tactical vehicles, aircraft, and even on concrete and brick walls for blast mitigation,” Weese said. “If LINE-X can handle the battlefield, imagine how it will protect your truck in the outdoors. Furthermore, as a spray-on coating, LINE-X seamlessly adheres to any shape or surface contour.”

Guys driving around in brand-new Explorers, Denalis, or Suburbans are unlikely to avail themselves of this protection, but for those of you who hunt and fish out of older Jeeps, Blazers, Broncos, and the like, LINE-X Body Armor is worth a close look. Just keep in mind that Body Armour is a professional installation; it’s not a do-it-yourself project. (linex.com)

The LINE-X ULTRA coating in OD Green provides maximum protection against the elements.