AR-15s in .223 Remington are the most popular rifles in America right now. But some states don’t like them, at... 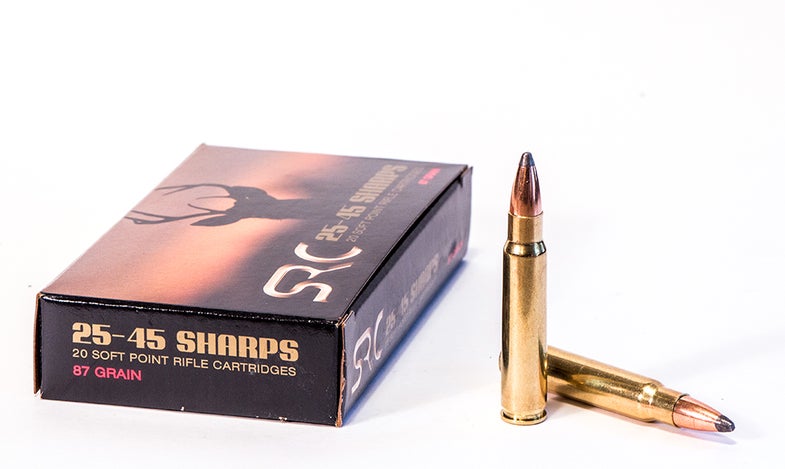 AR-15s in .223 Remington are the most popular rifles in America right now. But some states don’t like them, at least when it comes to big game. Eight of the 43 states that allow semi-automatic rifles for big-game hunting do not permit .22 caliber centerfire cartridges for same. This was the driving force behind the new 25-45 Sharps. Created by necking the .223 Remington case up to .257 caliber, the 25-45 Sharps will work in any AR-15 and feed from any AR-15 magazine. All that’s required is a barrel change.

Twenty-five caliber rifle cartridges like the .257 Roberts are popular because they work double duty on big game and varmints. Wanting to test that two-way utility from an AR-15, I obtained a complete upper in 25-45 Sharps, as well as 200 rounds of ammo from the Sharps Rifle Company (SRC). The cartridge lived up to the claims of matching .250 Savage ballistics. Out of an AR-15 with a 16-inch barrel, it pushes an 87-grain Hot-Cor bullet, the only factory load currently available, at 2,850 fps.

Inspired by the ballistics, I re-barreled a bolt-action Mossberg MVP, which feeds from AR-15 magazines, to 25-45 Sharps and took it to Africa where AR-15s are not allowed. It worked, cleanly dispatching three warthogs, a steenbok, and a jackal. SRC plans to soon offer replacement barrels, complete rifles, and even a variety of factory loads with purpose-built bullets from Hornady and Nosler.

It’s legal for big game in almost every rifle hunting state. (PA does not allow semi-automatics for big game.) It performed as promised both at the range and in the field.

Requires a barrel change, and ammunition selection is limited.

The 25-45 Sharps can affordably turn your AR-15 into a near-nationwide big game and varmint rifle.