There’s no shortage of quick-fletching systems on the market, but the Helios from Nockturnal is the only one that includes... 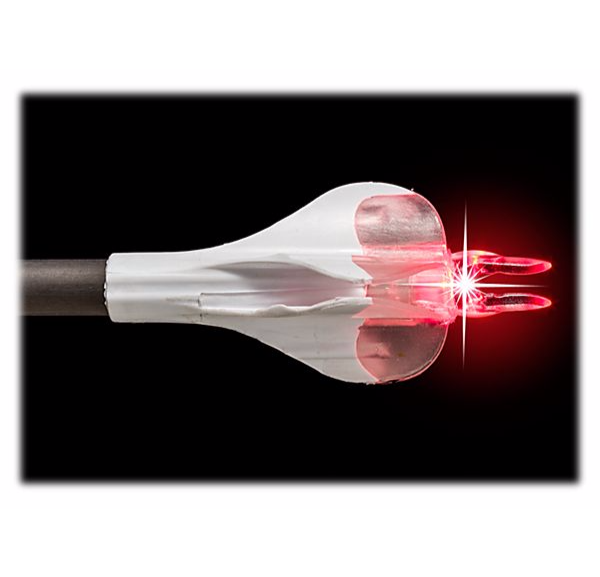 There’s no shortage of quick-fletching systems on the market, but the Helios from Nockturnal is the only one that includes a lighted nock. In theory, it’s a great idea. You get the performance of a helical fletching, and save a few dollars as they’re bundled with an LED. But the ultimate question, of course, is how do they shoot? I decided to figure that out by testing them against regular straight-fletched Blazer vanes.

Right out of the package, the 6-vane Helioses are noticeably smaller than Blazers. The vane configuration looks like a biohazard symbol, a design that Nockturnal says increases arrow spin, much like a helical fletch. With the nock, mine weighed 55 grains each. I made a fresh batch of Maxima Blu RZ 350s for this test, and the finished Helios-fletched arrows, without field points, averaged 291 grains while the Blazer-fletched arrows averaged 273 grains—an 18-grain difference. When put through a chronograph from my Bowtech RPM 360 (28.5-inch draw, 72 pounds) the Helioses shot 309 fps compared to 317 fps from the Blazers.

Finally, a friend and I shot groups. We both shot three groups of three at 20, then 40, then 60 yards. The average group sizes were:

The Helios proved ¾ inch better at 20 yards, a wash at 40 yards, and more than 2 inches better at 60 yards. At the end of the day, they behaved very much like you would expect typical helical-fletched vanes to; they bucked the wind and produced tighter groups, while increasing drag and costing you a little speed.

Most shooters will see tighter downrange groups thanks to the Helios’ funky helical-like design, which increases arrow spin compared to straight fletching. They’re extremely tight fitting but otherwise easy to install, requiring only a dab of Fletch-Tite or gel-based superglue.

The added weight and increased drag from the helical-like design moderately decreases speed. That extra 20 grains in the back also reduce the arrow’s front-of-center and makes the arrow’s dynamic spine slightly stiffer. Yet after an initial sight-in, most bowhunters will have no issues shooting this slightly altered weight distribution.

If you’re looking for a quick-fletch system, and you like to shoot lighted nocks, the Helios Lighted Vanes are a no-brainer. They’re well worth the price, both in terms of convenience and performance.