Love it or hate it, the Double Bull has long been the Cadillac of ground blinds. When it comes to... 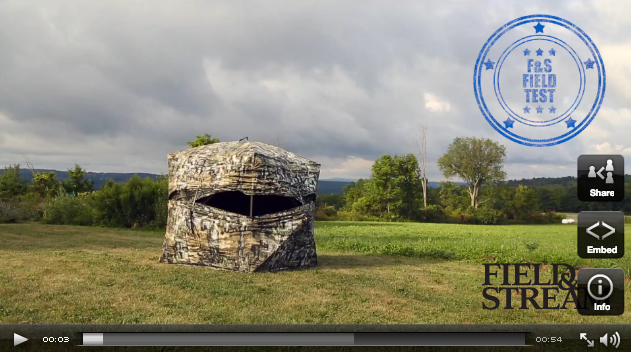 Love it or hate it, the Double Bull has long been the Cadillac of ground blinds. When it comes to ground concealment, some hunters, including a few of my buddies, will only use a Double Bull. But some hunters own a Double Bull but have never taken it to the woods—because they can’t figure out how to set it up.

Google “Double Bull set up,” and you’ll find page after page of grown men complaining about how “virtually impossible” it is to use the stand. So I decided to test this and film my first-ever Double Bull set-up attempt. Full disclosure: Beforehand, I watched the Primos instructional video and every other relevant video I could find on YouTube. Also, I talked with a friend who’s been using a Double Bull for years. As you can see in the video, the first attempt took me 4 minutes and 6 seconds. About a minute of that consisted of fumbling—panicing, really—but now with some practice, I can do the whole show in about a minute. That friend of mine can set his up in about 20 seconds.

Aside from the set up, Primos has updated most everything about the Double Bull, from hubs and poles to windows and doors, for the new deluxe model. Plus, the blind is wrapped in the new Truth camo, and it comfortably sits two hunters.

HITS: In the old Double Bull, the pole hubs were weak. Primos addressed this by introducing a deeper ball-and-socket design, and the backdoor poles have been beefed up, too. The deluxe model also features sidewall pockets, and the window attachments are more secure and easier to operate one-handed than they were before. Likewise, the shooting window opens and closes with a draw-cord tension system, and after using it, you’ll want to set fire to any blind that uses Velcro or loud zippers. The doors are zipperless, too, and hold tight in stiff winds—which I initially doubted. The blind material—a cotton/poly blend—isn’t waterproof, but it’s much quieter when pelted with rain or acorns compared with plasticized waterproof blinds.

MISSES: The back windows don’t secure nearly as well as the others and tend to flap in a stiff breeze. They’re designed only for a quick peek, so you can’t shoot at 360 degrees. Also, when water-tested, our blind leaked at the seams. That said, the new Double Bull is certainly huntable in the rain, but if you’re looking for a dry suit in the woods, this isn’t it. And really tall hunters may have trouble with the 70-inch head clearance and the low shooting-window height.

TAKEAWAY: If you can figure out how to set it up, the Double Bull Deluxe is as nice as ground blinds come. Everything, from the blind material to the doors and windows, has been optimized for silence.