We Hit the Marsh with Three Popular Neoprene Waders 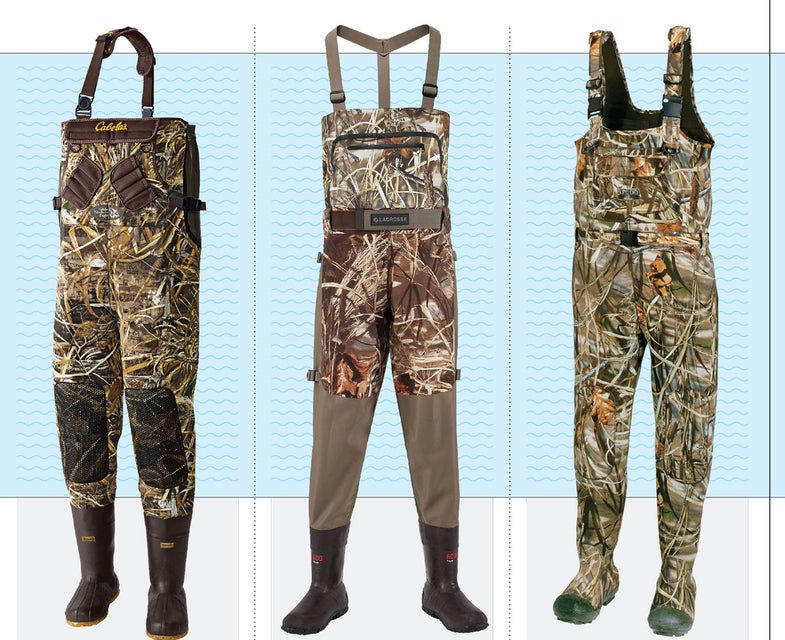 Hardcore waterfowlers are tough on gear, especially waders. Slogging though marshes, potholes, or flooded timber and brush while setting out and recovering decoys, sometimes in sleet and ice, will quickly reveal any flaws in construction or design. We asked three such hunters to spend a season wringing out the heavy-duty waders at top, rating each on functionality, comfort and, most important, durability.

THE LOWDOWN The innovative ambidextrous one-strap suspender caught the eye of Marvin and Haines, who said it added value because it let them switch the strap and buckle to the offhand side, where it didn’t interfere with shooting. Broad disagreed, calling the strap “about as good of an idea as New Coke!”

The testers agreed that the waders were well made and would stand up to hard use. “I broke a lot of ice with these waders and never had any problems,” noted Haines. Broad said, “The knees were nicely reinforced. Material was very comfortable and allowed for a fair range of motion.”

Marvin was concerned that the extra seams and sewn parts might create durability issues. “I am very tough on gear. That said, these would be my go-to waders for open water where brush and nasty stuff isn’t a factor.”

THE LOWDOWN The Swampfox mates breathable Taslon nylon uppers to neoprene lowers and can be used as full waders, or as extended hippers with the upper portion rolled to the waist. Marvin appreciated the durable construction and said, “I beat the snot out of these, and they never leaked.” He also liked the baggier design, which made them easy to put on and take off.

Haines also liked the fit, saying, “It was like I was wearing a pair of pants in the water, but I didn’t get wet.” However, he said, the elastic straps made the waders sag, especially once he’d filled the pockets with ammunition.

Broad said the detachable waist belt and adjustable knee straps were innovative. He praised the overall durability but noted, as did the others, that these are built for early-season use “above 40 degrees.”

THE LOWDOWN For overall durability and value, the least-expensive pair of waders in the group scored well. In general, testers found a lot to like for the price. “They do lack a few features, but they cost less than the others,” Broad pointed out. “And that makes them a good product for the price.”

The main issue with these waders was the design and construction of the studded boots. Although the footbed was comfortable, the weight of the boots made for heavy going in the field, Haines said. “The cleats don’t seem to add extra traction. If you are doing a lot of walking, these are not the pair to get.”

For Marvin, the design of the boot also led to cold feet. “Early season, it’s not a problem, but in January, my feet stayed cold,” he said. On the other hand, he called the overall fit “superior.”

MISSES “Pockets could be bigger.” —Haines