I’ve been experimenting a lot lately with dry flies that feature orange wings or posts. Maybe it’s because I’m getting... 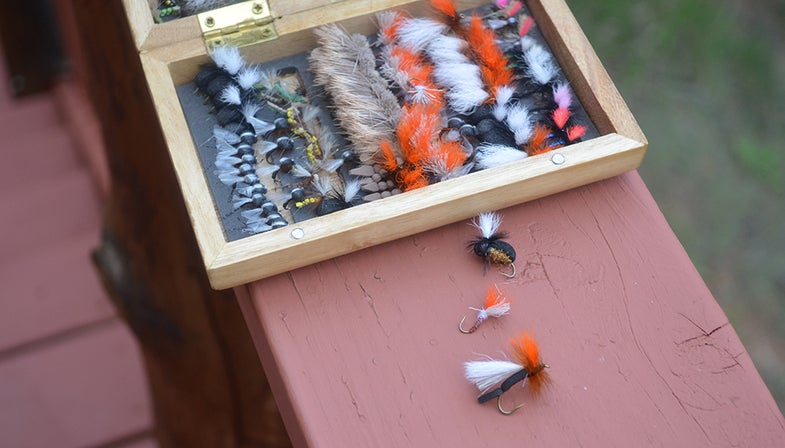 I’ve been experimenting a lot lately with dry flies that feature orange wings or posts. Maybe it’s because I’m getting in the Halloween mood, but I am finding that I like the orange accents more than I thought I would, particularly for dry-fly fishing in the fall.

For starters, fall is when the leaves drop, and there is more natural flotsam riding along the surface than at most other times of the year. I can see the fly better, and that leads to better reaction time on the hook-set, especially in lumpy, foamy water. I have long been a fan of the pronounced white post or wings on flies that make them more visible in the chop and I am obviously not alone, hence the enduring popularity of the Royal Wulff the Trude and the H&L Variant (three of my top 50 fly patterns for anywhere in the country). But I sometimes lose sight of white dry flies in the bubbles.

The question is whether or not the trout are able to notice the orange as well, for better or for worse. Does the orange (which doesn’t look natural in the least) put the fish off? Or does that orange add a little bit of attractor magic that actually gets their attention? You could ask the same of the color pink, which is routinely wound into popular October caddis patterns like the Clown Shoe Caddis.

I think the answer is yes and no (like so many things with fly fishing). I remember a conversation I had with the late Dr. Robert Behnke (Dr. Trout) when he explained that trout do indeed “see” colors, though not in the same way that the human eye does. If you are matching the hatch, and there are plenty of natural bugs on the water, your best bet is ALWAYS to mimic that natural as closely as possible, including color shades in the fly. Then again, profile and size (and presentation and drift) might play the most important roles of all, which is why a plain gray Parachute Adams can still work wonders in a hatch of blue-winged olives.

Then again, when you are prospecting with attractor patterns, the accents that make a fly stand out are particularly effective. I’ve turned over about a million rocks in my life, and have yet to see any natural bug that looks remotely like a Purple Prince nymph, but that fly sure works at times.

I’ve also worn scuba gear and watched trout react to different colored flies–and particularly strike indicators–to learn that it isn’t so much the color as it is the profile and the sound of a solid indicator splashing down that will put an otherwise interested fish off.

Here’s how I net out: Orange works in water that is moving at least a foot a second. If the current is moving that fast or faster, go with it. Naturally, you want to use less orange the more you want to mimic a bug that’s hatching, so go sparingly when matching a hatch. But the benefits of you immediately seeing the fly when it lands and as it rides far outweigh any drawbacks, so long as the water is moving. When you are straight-up attractor fishing, orange can rarely hurt you, especially in flowing currents. If, however, the water is glassy, and the fish are obviously taking time to carefully scrutinize flies before they commit, stick with the natural colors only.