I just returned from an extraordinary flats fishing trip to Christmas Island, in the central Pacific Ocean. And though the... 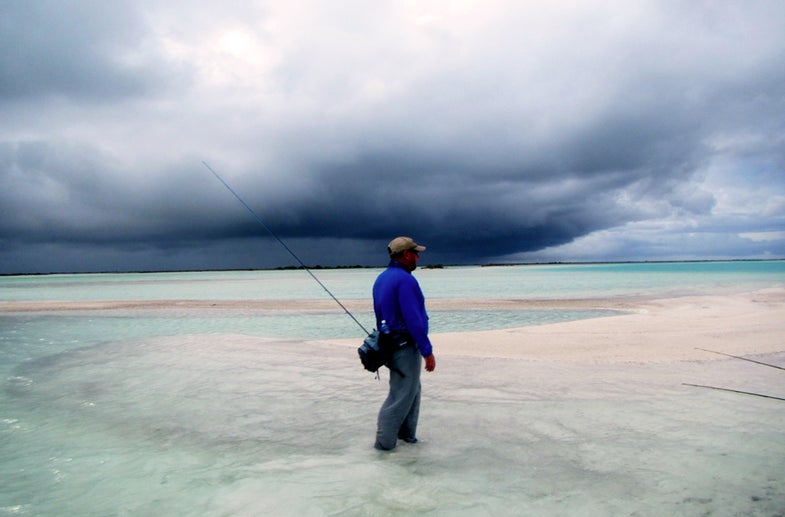 I just returned from an extraordinary flats fishing trip to Christmas Island, in the central Pacific Ocean. And though the fish were plentiful, the crazy El Nino weather pattern is in full effect, which meant plenty of rain and clouds throughout the week. By adjusting our approach, we were still able to catch many bonefish, triggers, and trevally under conditions that would have had many anglers bummed out. So here are the five main lessons I learned about sight fishing and flats fishing in cloudy (even rainy) conditions, which I think can be applied to a variety of scenarios, from the carp flats near home, to spring creeks or lakes for trout, as well as any exotic bonefish flat.

1. Wear yellow lenses. In fact, I’ve been wearing yellow more and more often, even on partly cloudy or partly sunny days. Smith Optics has a lens called “Low Light Ignitor,” which is a type of yellow, and it does noticeably improve visibility in tough conditions. I have no idea why that is, nor do I care. All I know is I see fish better with these lenses than I do with others on low-light days, and they have literally been the game-saver many times.

2. Slow your approach by at least 50 percent. Your range of vision is, at least, half of what it would be on a bright day, so you need to creep up on fish within 30 or 40 feet instead of 60 or 80 feet. You can’t go bulldozing across a flat in those situations. Little splashes and air bubbles will spook fish, so the only way to get in range is to wade quietly. The only way to wade quietly is to go slow. At least half speed.

3. Look for signs of fish (or parts of fish), not the whole fish. On a sunny day, you might see a shadow from 100 feet or more away. On a cloudy day, I shift my approach entirely, and stop trying to look through the water, as much as I am studying the water itself. On cloudy days, I’m looking for wakes, pushes, nervous water, and that stuff. If you get lucky, you might see fish parts, like a tail or a dorsal fin (on a trout creek, of course, you look for rise forms).

4. Take more “maybe” shots. You don’t have the luxury of being 100 percent certain in low-vis conditions, but if it looks like a target, go for it. Casts are for free. On a bright day, I’m all about casting economy and making every shot count, the first time. Wade into position, and set up for the perfect shot, factoring in the sun, shade, wind, and other variables. Under clouds, if you think you have a shot at what might be a fish, take it, and ask questions later.

5. Let fish reset. The good news about clouds and rain is that the fish have as hard a time (or harder time) seeing you just as you do them. So if you happen to be walking along and you bump a fish, watch it and see if it settles down. On a sunny day, that fish is likely to keep right on cruising, but in the clouds and rain, they’ll often chill back out. Now that you know where they are, give them a cast and see what happens. Even a little flip cast at a fish that’s moving away, but not panicked, can coax an eat now and then.