Like many other American anglers, I yearned to someday fish in Cuba. The forbidden fruit. The Hemingway lore. Pristine natural... 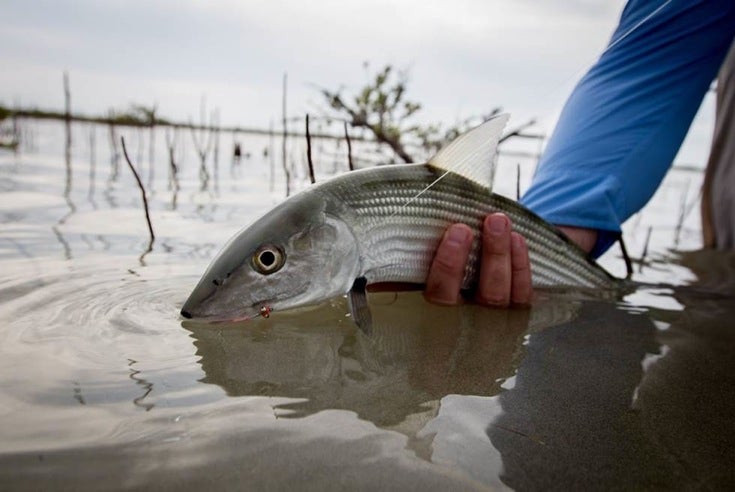 Like many other American anglers, I yearned to someday fish in Cuba. The forbidden fruit. The Hemingway lore. Pristine natural resources and willing bonefish, tarpon, even permit. My dreams danced with the possibilities.

But I never acted on it. Oh sure, I knew how to get there through the side entrance—flying through Cancun and tucking a twenty in your passport so it wouldn’t get stamped. But I didn’t test the embargo—not so much out of patriotic obligation, rather because I was chicken. I often travel internationally, and I didn’t want to risk the nightmare of ending up on some special Customs and Border Patrol list I’d imagined could earn me “special service” every time I flew back home.

But that’s all changed now. Not changing. Not about to change. Changed.

By and large, Cuba is open for business. And all you have to do is note the dozens of Havana charter flights on the departure board at Miami International Airport on any given day now to realize how much this change has already happened.

I was on one of those charter flights within weeks after President Obama’s historic visit to Havana, in order to experience saltwater fishing as part of an Orvis exploratory trip to Cuba. The largest flyfishing company in America has just announced it would be offering guided fishing packages to Cuba. That’s a significant milestone on a number of levels, but most importantly, it’s a breakthrough for many anglers like myself who are interested in the full Cuba experience, but want it dialed in and fully compliant with “people-to-people” visa regulations. Orvis has spent the past 18 months getting its program together with expert legal and diplomatic counsel.

I was immediately struck that Cuba is one of the few places I’ve visited that was almost exactly as I had envisioned it to be. Cuba is indeed a time warp, replete with 1950s autos, billboard murals of El Commandante, incredible music, art, interesting food, and much more. We drove from Havana to Playa Larga on the Bay of Pigs (two hours), and on the way, noted the road sign that marked the spot where the invasion was halted, Castro himself leading the defense.

We fished a part of the nearby Zapata National Park that encompasses roughly 300,000 hectares, where only four boats per day are allowed to fish. While parts of Havana are seemingly locked in the 1950s, the shoreline and flats here, minus almost any hint of human existence, are locked in what I imagine they may have appeared before 1492. At one spot, I jumped out of the boat, and waded a full mile, in bare feet, on soft but firm sand, and had shots at dozens of 3-5-pound bonefish.

The thing that makes the Orvis travel package different from the others is pretty simple. There have been many fishing programs available to anglers for years. I’ve heard wonderful things about many of them. I’ve heard about chasing the permit that ride the wakes of stingrays. But I’ve also heard about the seven-hour bus rides, followed by four-hour boat rides, and such. That’s great if you are completely focused on the fishing. I was as much or more interested in the cultural aspects of the trip, and am eager to go back with my wife, who will surely do some fishing, but is also interested in the other options. Orvis seems to strike a good balance in that regard.

Answers to logistical questions: The fishing guides are great. They speak perfect English, and are very much in tune with the fishery. Their conservation ethic is among the best I have noticed anywhere. All the people we met were quite friendly. I felt safer in Cuba than in many other countries I visited. The food is quite good, especially in the newly-opened “paladares” restaurants, where you eat fresh grilled lobster, crab, pork and other local dishes in what are literally extensions of people’s homes. And after dinner, of course, one can smoke a fresh Cuban cigar.

Despite rumor to the contrary, Cuba is not necessarily cheap. The government and locals have found ways to tap into the blossoming tourism industry, and there seems to be almost two parallel economies–one for the Cubans, and one for tourists. Americans are more and more present in the tourism mix; one fishing guide told me that two years ago, Canadians and Europeans comprised 90 percent of his business, and today, already, American anglers account for over 80 percent of the mix.

If you are considering a trip, I’d say go sooner than later. Stroll the Malecon and experience some of the grit and hustle in Old Havana. Listen to the music. But go with a program that’s dialed. And if you fish, be sure to appreciate the rawness of the natural settings to be found in Cuba.

There are, of course, no guarantees as to what will happen in the future. But for now, the present is far more exciting and brimming with opportunity for Americans than it has been in a very long time.