The Sad Story of a Boat

Way back in June of 2013 I took possession of a roughly 15-year-old wooden fishing dory that was in disrepair... 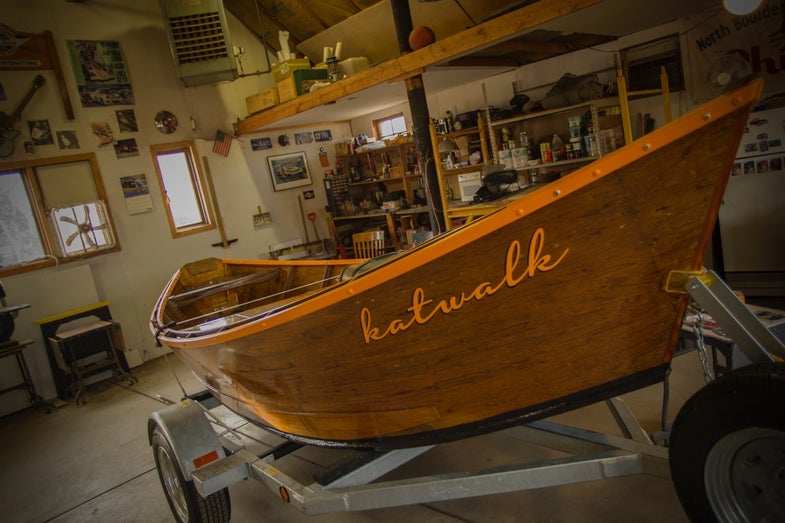 Way back in June of 2013 I took possession of a roughly 15-year-old wooden fishing dory that was in disrepair and needed a ton of work to make her “river worthy.” She wasn’t beyond saving, but needed a complete overhaul. This was a task I knew would be a lot of work and something I had never attempted before, but thought it would be a fun project and a fantastic educational process. It was all of those things and more.

I started by taking her almost completely apart. The floor came out, two bench seats with dry storage, the stern seat, and everything inside. I then flipped her over, where she stayed for almost a year. With the help of quite a few people, I redid the entire bottom and outside of the hull. When she was finally flipped upright, she looked like a new boat. At least from the outside. Then it was time to start on the interior, which took much longer than I would have ever thought. There were a few major setbacks along the way, when weeks of work had to be redone, but in the end she was something I was immensely proud of. Thinking back over the last year and a half, I put at least 200 hours into the project—not to mention the time donated by friends and family and occasional consulting with the good folks at Boulder Boat Works.

All along, though, I had been struggling with a name. It had to be perfect for such a classy vessel. Many names came and went until August 7 of this year, when the unthinkable happened. My poor, sweet 26-year-old sister tragically passed away in a drowning accident while floating a river near her home in Texas. It was obvious to me at that point what I had to name the boat. My sister’s name was Kathryn Walker but many of her friends simply called her Katwalk for short.

Just before Christmas, I took advantage of some very warm weather and, barring a few cosmetic touches, finished the Katwalk on December 20. I could barely contain my excitement and rounded up my wife and kiddo for the inaugural float on my local bass lake. There was a little bit of open water, and we took her out for a brief 15-minute row. She felt amazing. Much lighter to the touch than I would have expected. She floated like a cork and spun like a top. I was pleased. We pulled her out, put her on the trailer for the mile-and-a-half drive back to my house.

She never made it home.

About one mile from my house we were T-boned by a Suburban that had gone through a traffic light. The impact flipped the jeep we were in—totaling it, my trailer, and the Katwalk. The boat is far beyond repair and will never float again.

Never in my life have I felt so frustrated, mad, and dejected. While I’m trying to see the positives, it’s been hard. Yes, I can make or buy a new boat, but it will never be this one of a kind vessel. Besides just needing to get the story off my shoulders, I’m wondering if any of you have ideas for using what remains of the Katwalk. I’m so emotionally attached at this point that I’m just not sure what to do with what’s left. I’ve received some suggestions—to turn it into a planter, make some furniture, take a piece and integrate it into a new boat, or simply give it a viking funeral.

I’m all ears and just want to channel all the work, emotions, and love that I put into the project toward something positive. Let me know if any of you have any great ideas.