Think About Your Fly-Fishing “Pace of Play”

Those of you who have followed “Fly Talk” long enough know that I like to draw analogies between golf and... 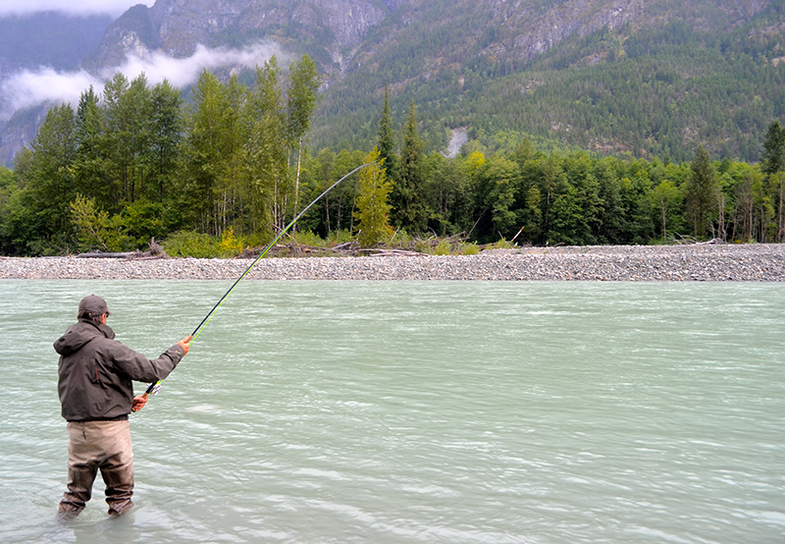 Those of you who have followed “Fly Talk” long enough know that I like to draw analogies between golf and fishing because I think the productive mindset for both sports is very similar. They’re both games that place a premium on strategy and planning, and if you can ingrain some basic swing and casting techniques to the point that they become muscle memory, you can delve into mental aspects that allow you to play on a higher level. You certainly don’t need to be a scratch golfer to be a great angler, nor vice versa. But in my case, I still find myself learning lessons on the links that I can apply to rivers. Now that I am proudly sporting a 12 handicap, I honestly think a lot of that is attributable to lessons I have learned with wet boots in rivers.

One of the things we almost never talk about in fly-fishing is the “pace of play.” How quickly (or slowly) do you move upstream or downstream, covering water?

Granted, in golf, that’s largely a courtesy consideration. Nobody wants to play a six-hour round of golf watching the foursome in front of them waggle over every shot, labor over every lined-up putt, or bushwhack through the weeds chasing balls sliced or hooked off the fairway. I find that, in those situations, my score usually suffers because it throws me off my tempo, and I get frustrated and make bad swings and poor decisions.

Likewise, in fly fishing, there’s also a courtesy aspect, because you don’t want to be working your way down-river, only to be low-holed by someone who jumps in front of you, or blocked by someone who camps on a run.

But unlike golf, in fly fishing, there’s a much more practical reason to be thinking about pace. If your tempo isn’t right, you often won’t catch as many fish as you would if you move along, and here’s why…

It is an absolute fact that your odds of hooking fish in a given run decrease incrementally with every cast you make. I’m all about being thorough and covering a run methodically. Sure, if you are dry-fly fishing for trout, to make maximum opportunity of a run in the river, you want to work downstream to upstream, and pick off a few in the tailout before you drop the money cast in the seam in the heart of the run. But I have seen SO many people dibble and dabble around, planted at the back of a run, chasing the dink fish, that they ultimately blow the run up, and spook off “Big Mama” trout before they even get a chance to unfurl the cast that really matters. And that bothers me.

We forget, too often, that a trout has conical vision, and its eyes are set on the top-sides of its head, and not pointed straight ahead, as human eyes are. It doesn’t take much of a shadow (or a splash, or the sound of your boots grinding rocks in the river bottom) to set their alarms off. When I fish a run with trout sipping dries, I will often make a tailout cast or two as a warmup act. Indeed, maybe I’ll hook a fish, and hopefully I’ll fight it out of the mix before it goofs up the run. But when I see a big fish rise–the fish I really want–I lock on, right then and there. I sit, and wait, and watch… and only when everything lines up, I don’t mess around. I throw trump, right in the zone. As soon as you locate the “worthy” fish, nothing else should matter.

Another great example is when you are streamer fishing, especially when you are swinging for steelhead or salmon, or even sea-run brown trout.

A very valuable lesson I learned from legendary guide Oliver White as we were fishing at Kau Tapen Lodge in Tierra del Fuego in Argentina is that, as you’re working downstream swinging flies, you must stick and move. Make the cast, let the fly swing, and then take a few big steps downstream if you don’t get bit. That’s often counter intuitive, because you may crave another shot at the “honey” water. You want to iron out all your imperfections and get it right, and do it over and over until you do just that. But, as with golf, the first shot played is the only one that counts. As such, if you move too slowly and repeat yourself, you might think you are ironing out the kinks, but all you are really doing is telegraphing to the fish that something “weird” is coming their way. They might not see it, but they might feel it. Of if they see it in the distance, it might not be enough to cause them to bite. You want the fly to simply “appear” in their wheelhouse, suddenly. Otherwise, they won’t eat it, no matter how sexy the fly pattern is, or how great your cast and presentation are.

Now, I certainly understand that sometimes options are limited. If there are many people on the river, and you’re in a “combat fishing” situation, you’re going to want to find the good water and stay there. But even then–especially then–I would suggest that you want to really slow down your casts, and make every one count. By flogging water, you transform fly fishing from a game of skill into a game of luck. And while that may indeed be fun, and even produce results now and then, it won’t make you a better angler.

Understanding that how you move along in a river as you fish, whether you are casting dry flies, or nymphs, or streamers on the swing, WILL make you a better angler, and I encourage you to be thinking about the pace at which you cover water, every time you fish.