What Makes a Great Fly-Fishing Year

Fly fishing is never as much about the fish themselves as it is about the miles you roll, the waters... 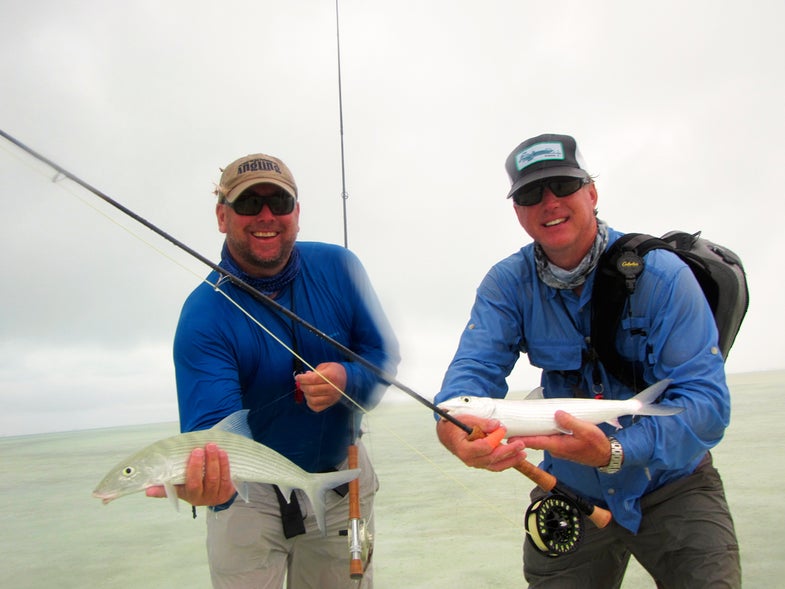 Fly fishing is never as much about the fish themselves as it is about the miles you roll, the waters you see, and, most important, the people with whom you share the experiences.

I had what most anglers would consider an epic 2015. I traveled to places I’d always wanted to see, from New Zealand’s South Island, to Italy, to Christmas Island. I caught a bunch of fish and made a few new stories along the way. But I have to tell you that, as I sit by the fireplace and reflect on 2015, what really sticks out in my mind are the days I spent reconnecting, or forging deeper connections, with people who are special to me.

Of course, that starts with my core family. This year I bought my first drift boat—which proved to be all that I hoped for in terms of being a river chariot and a way to share quality time with my 15-year-old son, Paul (who many of you have watched grow up on FlyTalk). It’s one thing to row him into a spot and watch him cast, but it’s another to watch him take control of the sticks on the Colorado River and set his mom up for a shot at a big, rising brown trout. He’s going to be a far better angler than I ever will be, and that makes me happy.

Later in the year, I had the chance to row my wife of 26 years, Sarah, and her sister, Susie, down the Yampa River in that drift boat, where I watched them both catch enormous trout on dry flies. The best part of that trip was that it was the first time the sisters had fished together in the boat you all helped to name, “Fred’s Fault.” Fred was my fly-fishing mentor and my wife and her sister’s father. I have absolutely no doubt that he was smiling down on his girls that day as we floated down the river. I could feel it in my hands as I gripped the oars.

In early September, I went back to my family’s cabin in Michigan and fished for an evening with Tom Bie, editor of The Drake magazine. We’ve been friends a long time. Sure, we work for different publications, and often compete for ad dollars, but we are the same age and are kindred spirits. He’s written for me many times, as I have done the same for him. It meant a lot to show him where I’m from, and what I’m all about. (Then I took him to the Big House, where we watched Michigan kick his alma mater Oregon State’s butt—but we had a good time, and it was all about the fishing, and eating fried walleye in the Enchanted Mitten.)

In October, I visited the Missouri River to fish with Pete Cardinal for the first time in about 15 years. Last time I was there, I was writing a book called Castwork, which became a bit of a cult classic, was discovered by the editors of Field & Stream, and ultimately launched my career. Pete was (and is) the most demanding guide I have ever fished with, but he’s also one of the smartest and the best. I felt like I’d “made it” this time around, not because I am a magazine editor now, but rather because I was able to drop the dry fly where he wanted it more often than not. Back then, I remember spending evenings at Flyway Ranch with Pete and Jim Range, who is now gone but left an incredible legacy in founding the Theodore Roosevelt Conservation Partnership. I had no idea I was in the presence of greatness back in those days, but now I seldom fish without thinking about what those times meant, and where they lead. (By the way, Pete went to Michigan State, and I went to Michigan, and we fished the week before the game that ended in “the punt thing.” We’ve since spoken a few times, but he’s never mentioned the game, which, to me, is a sign of true friendship.)

In early November, I spent a day fishing on the Lehigh River, in Pennsylvania, which is the first river I ever dropped a fly into, when I was 11 years old. This year, I fished the river with a friend who I have always admired for his writing chops, as well as an unmitigated, unbridled, manic passion for angling, in any form. Sometimes I tease him about being a baitwhacker, but he’s also one of the best fly anglers I know, and I’m proud to call him a colleague—Joe Cermele. We didn’t catch squat that day, but it was still one of my best fishing days of the year.

Of course, my de-facto brother and FlyTalk partner, Tim Romano, and I got some “sessions” in, as we do every year. But this fall was special, because I rowed the boat and he fished. In years past, it’s been the other way around. I now know the line for “Yarmony” rapid, and “Eye of the Needle” on the Upper Colorado thanks to Timmy. But he caught a bunch of whopper browns on streamers and dry flies thanks to me.

Just a couple of weeks ago, I returned from Christmas Island, having fished there with my old buddy, Paul Zabel (that’s us in this photo, doubled on bonefish). More than 20 years ago, Paul and I started knocking around the San Miguel River near Telluride, Colorado. He was (and is) a friend of my brother, and back in the day, I showed him some secret spots that required a bloodoath of secrecy, and he held up his end of the bargain. I haven’t fished some of those places in 20 years, but I’m always eager to hear him report on them. That’s why you tell good friends about the secret spots. He and I have been elk hunting, and we even knocked out a long trip down the Baja for a SaltWater Sportsman story almost 10 years ago—but we haven’t fished much together since. Standing on an isolated flat two weeks ago, in the literal middle of the Pacific Ocean, I couldn’t help but wonder, How the hell did the two of us get here? And at the same time, it felt completely natural, as if time hadn’t passed at all.

The point of all this is to say that the older I get, and the more I fish, and the more places I see, the “who” matters more than the “what” or the “where.” That’s not to say I won’t be charging ahead in 2016—my to-do list is still pretty long, and I have more trips lined up. But when I go to Chile in February, it will be with another old friend, Chad Miller. And when I go tarpon fishing in the 10,000 Islands of Florida, it’ll be with Al Keller, with whom I hooked my very first tarpon, when I fished with my late father-in-law in the salt for the first time. You can also bet I’ll be rowing family and friends a lot this summer in Colorado.

You may get a rod for Christmas. Or a shiny new fly reel. I truly wish you do. I hope you’ve been very good, and get exactly what you’ve asked Santa for. But I also hope that you use that stuff for what it’s really for and make some new connections, or reconnect with old ones, because that’s what fishing’s all about.

As for me, I found out just the other day that someone else in my life has said that her goal for the coming year is to start fly fishing and to get out on the water with me: My mother.

She doesn’t fish much (yet), but she has always been supportive of this odyssey I’m on. Teaching Mom to fly fish might very well be my greatest adventure of 2016, if not my life. And I’m very much looking forward to it.

And oh, by the way, as for that quote at the top of this post, that’s something I said to Tim Romano about 10 years ago. And I’m still trying to live those words each day. So, happy holidays from the FlyTalk family. Thank you all, and here’s wishing you and yours the very best times on the water in 2016.