The thing about fly fishing in Louisiana is that every time I go there, I find a few new reasons... 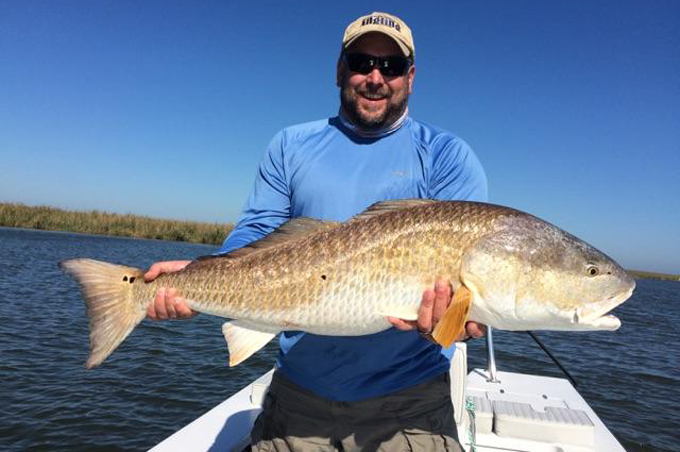 The thing about fly fishing in Louisiana is that every time I go there, I find a few new reasons to fall in love with the place even more (and I’ve been going there for about 20 years now). I chanced upon almost 100 more reasons this week, as I took a mini-vacation to go catch up with my buddy, Captain Gregg Arnold and dabble around the marshes near Hopedale and Venice.

I brought another friend, Joel Johnson from Trout Unlimited, to show him a bit of this incredible saltwater scene. And Gregg recruited another guide, Frank Praznik, to kick around with us on Tuesday, just for grins. Long story short: We had two boats and a massive flat all to ourselves. The conditions were perfect–sunny skies, clear water, light winds, and a loving tide. The bull reds were right where we hoped they would be. And baby… it went off.

I fished with Frank, who quickly became a kindred spirit. Like me, he’s from Colorado. Totally laid back. Eyes like an osprey. Fun to hang with, and even more fun to team up with on a flats boat. He first came down to Louisiana in 2005 to volunteer with cleanup efforts after Hurricane Katrina. Frank formerly owned St. Peter’s Fly Shop in Fort Collins, Colorado, and he’s been far and wide (Kamchatka, Russia, etc.) but he latched on to Louisiana from the onset, and has since carved out time to come down every year and guide in the fall, when the big, “bull reds” show up in the marshy flats.

On our day (which started off foggy, but the sun broke through right when we reached our spot), Frank had no sooner killed the engine, and I stepped up on the casting platform at the front of his skiff, when we saw the first fish. One cast, and bingo, we were on the board. But the highlight of the day happened near noon, when the sun was at its peak, and the water warmed, and the redfish cruised high and happy in the water (which was only a few feet deep), and we could spot them 50 yards away, like big copper pots just below the surface, occasionally boiling as they swarmed on schools of mullet.

I’m not lying when I tell you that I caught four fish in succession that, together, nearly topped the century mark in terms of poundage (we weighed them all with a Boga Grip). The first fish weighed in at 27 pounds. Ten minutes later, I caught a 23 pounder. A few minutes after that, I landed this beast pictured here, which tipped the scale at 30 pounds. And shortly after that, a slightly smaller, but obviously testosterone-filled male was peeling my fly line into the backing. When we boated that one, it was an 18-pounder. In other words, four casts yielded 98 pounds of redfish. That was a big deal for me, easily in the “Top Ten” list of all my highlight reel memories of fly fishing from anywhere I have ever fished on the planet. Still, these things happen all the time, according to Gregg, and Frank.

Now, to be clear, they weren’t four successive casts. I tossed a couple to measure out line, and made a couple crappy, off-target shots in all the excitement. But this isn’t a story about the prowess of an angler; it’s meant to be a testament to the amazing bounty in Louisiana waters. And truthfully, I saw four fish in a row, and caught all four I targeted, and they were all beasts.

I don’t care what anyone says. In my book, when it comes to sight fishing for big fish with a fly, when it’s “on,” there is no place in the world that can offer this kind of action, in these proportions, like Louisiana can. I say that with all due respect to the tarpon flats of Florida, and the striper shoals of the Northeast, which I dearly admire. But if you want to dance with the toads, this is the place to do it. Period. And after the four-fish flourish, Frank and I dabbled on to catch several more 20-pound-plus fish. I lost count, but I know I was well into double-digits… enough that Frank switched me over to a popper fly and we caught a couple on top. Trust me, there is also nothing quite like seeing the bull red track a twitching fly on the surface, and seeing that bucket maw open up and suck down your bug as your are stripping a fly line. It is surreal.

Granted, conditions have to be right to produce the kind of day that leaves you wondering, “Did that just really happen?” when you get back to the dock. And I’ve spent my fair share of days shucking oysters and drinking beer when I wished I could be out on the water in Louisiana. Call it karma. I was due. And I was surrounded by talent.

Now, if you want to experience some of this for yourself, I’d suggest you contact my man Frank Praznik, 970-682-0834, twp2fish@yahoo.com. But bring your patience, and understand that you might have to pay some dues to make it happen. But when it does… ‘Nuff said.