Pheasants and Steel Shot: A Good Combo, But Rough on Teeth 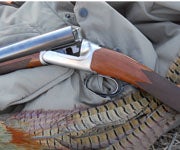 I hunt pheasants with non-toxic shot a lot. Some places I hunt, non-toxic shot is required. Any time waterfowl season is open, I load up with non-toxic because I want to be able to shoot at a duck, snipe or goose if it happens by. Mostly I rely on my dwindling stash of Kent tungsten-matrix, which is by far my favorite non-toxic pellet in the uplands: nearly as dense as lead, easy on gun barrels and teeth, and lead-like in its response to choke. Unfortunately it costs $2.50 or more per shell. Last season I did my pheasant hunting with steel since it is the cost-effective choice.

My field test coincided with the worst pheasant year at home in recent history, although I did find a few local birds and I made a trip to South Dakota as well. What I saw last fall was just what I have seen off and on for years when I have used steel shot on pheasants: it works.

I shot Winchester’s 1-1/4 ounce 4 at 1,400 fps in South Dakota, more or less the equivalent of a high velocity 1-1/4 ounce load of 6s, my usual lead pheasant load. If I shot birds, they fell dead with the exception of one I hit hard that fluttered off weakly instead of folding, but it was recoverable. At home I hunted with Winchester Xperts in 1-1/16 ounce of 3s at 1,500 fps. I used an IC choke in my Montefeltro and IC/M in my Gold Label. The only cripples my shorthair had to find for me were two birds I hit with only one or two pellets in the wing at close range through pure bad shooting.

My sample size was small but it seemed consistent with the findings of Tom Roster, a ballistician who conducted a large-scale study in North Dakota in the late ’90s. In the test, hunters used steel 2, 4 and 6 shot and hunted with trained retrievers.

Roster found 2s (and while he did not test 3s he rated them the second-best choice) performed best at all ranges. The hunters were required to take shots at various long and short ranges, and by far the most crippling occurred beyond 40 yards. The overall crippling rate (birds hit and not retrieved) with 2s was 8.5 percent which is comparable to the numbers I have seen for crippling rates with lead.

When hunters kept their shots inside 30 yards, where the vast majority of pheasants are shot, the crippling rate with all three sizes of steel dropped to under 3 percent, which is outstanding. Roster’s study used 12 gauge loads that only contained one ounce of shot, the payload of a 3-inch 20 gauge.

Although the price of steel has come down and the price of lead has gone up, steel does have its drawbacks. Steel works, but lead does work better. And, my experiment ended abruptly after my wife bit into a steel 3, grimaced in pain and said, “That’s it. Start shooting them with something softer.”