Writing about his M1 carbine, Dr. Ralph supplied the theme for this gunfight: Big Boys’ .22s. Both rifles were designed... 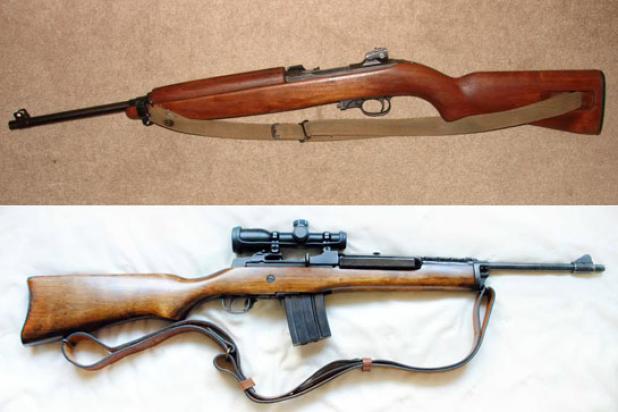 Writing about his M1 carbine, Dr. Ralph supplied the theme for this gunfight: Big Boys’ .22s. Both rifles were designed for shooting more than paper and tin cans, but these two are primarily peaceful plinkers. Critics might say plinking is all they are suited for, since they are chambered for rounds that many argue are underpowered for combat. The Mini-14 is a .223, while the M1 is chambered in .30 Carbine. Both rifles were also designed, at least partially, by two very different American firearms geniuses. Sturm Ruger’s William Ruger adapted the Garand action to the Mini 14, while moonshiner David “Carbine” Williams came up with the basis for the M1 while serving time in prison.

The Mini-14 is one of my favorites. It has that Garand style gas-operated bolt/operating rod that reminds me of my dad’s M-1. And I like the fact that it is wood and steel. There are folks who say the AR-15s are more accurate, and it’s probably so, but this one will shoot 2 to 3 inches at 50 yards with my bulk-bullet reloads while shooting fairly quickly. It is plenty accurate for me and also has the reputation of being super-reliable and working in conditions that will cause an AR to choke.

This one supposedly started life as a California Highway Patrol rifle and spent its time in the trunk of a patrol car. It’s a bit beat up, but the barrel and action show very little wear. I put a 2.5x compact scope on it and also I added a Williams peep sight that slides into the dovetail at the rear of the receiver that works well, too.

The M1 Carbine was bought from a friend who carried one from 1957 to 1961 in Southeast Asia. He lived next door, and I paid about $100 for it and have never looked back. It was made by Iver Johnson after World War II, but the parts are interchangeable with the military grade carbines. It’s a big boy’s .22, a lot of fun and the kids’ favorite rifle to shoot.

There are your choices. Vote and add your comments below. Keep those gun pictures coming to FSgunnuts@gmail.com. Last week’s Pledge Drive netted a number of new pictures, including Eugene’s Mini-14, but more pictures makes for more and better gun fights.