Wading boots with studs screwed into the soles I trust. As far as the kind of grips that go over... 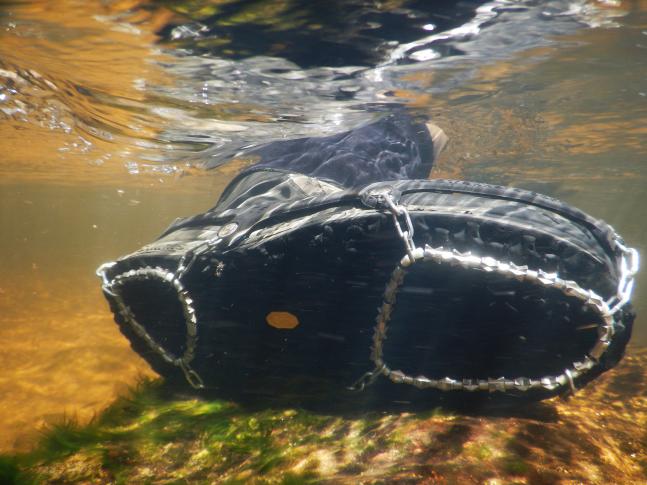 Wading boots with studs screwed into the soles I trust. As far as the kind of grips that go over a boot, well, they can be just as effective as screw-in studs provided they actually stay on the boots. I’ve had some bad experiences in the past with slip-over grippers coming off at the wrong time, so I will admit I was a touch leery of trying the new STREAMtrekkers, which are made by the same folks that produce ICEtrekkers. I was especially concerned because the Salmon River in CT where I was wading is one slick mother. Take swift current, water in the low 40-degree range, sharp sloping boulder faces covered in that hair-like green mung, and you’d better mind each step.

Unlike some of the other slip-over grippers I’ve worn, the STREAMtrekkers were much more rugged right out of the box. Heavy-gauge chains hold the stud rings to heavy-duty rubber outer bands that wrapped very tightly around my boots. The studs are actually what the company calls “traction beads.” They’re strung on aircraft-grade steel cables, made of case-hardened steel, and feature 6 points per bead that grip from all angles. In a full day of stomping around the Salmon, they didn’t slip, come off my boots, or shift positions on the soles in the slightest. I was pretty impressed by their performance.

So would I give up my studded boots permanently for STREAMtrekkers? Probably not. But they definitely can make life easier if you only own one pair of boots and don’t want to stud them. They’re also great for travel. Case in point, last month I fished in Montana and only packed studded boots because I didn’t want to lug around two pairs. When I showed up for our float trip, I was thinking we’d be in hard boats with rubber floor mats. Wrong. We had a raft with no hard bottom at all. With no way to take the studs out, I was the doofus standing on the floor mats from the guide’s truck so the boat didn’t pop and drown us in the icy Clark Fork. Of course, the next day we waded the Blackfoot, and I was happy to be studded.

STREAMtrekkers will set you back $42, and would make a nice Father’s Day gift.