A Giant Whitetail Falls in Kansas

The so-called “experts” (and that includes me) love to predict when the rut will happen, but no matter how much... 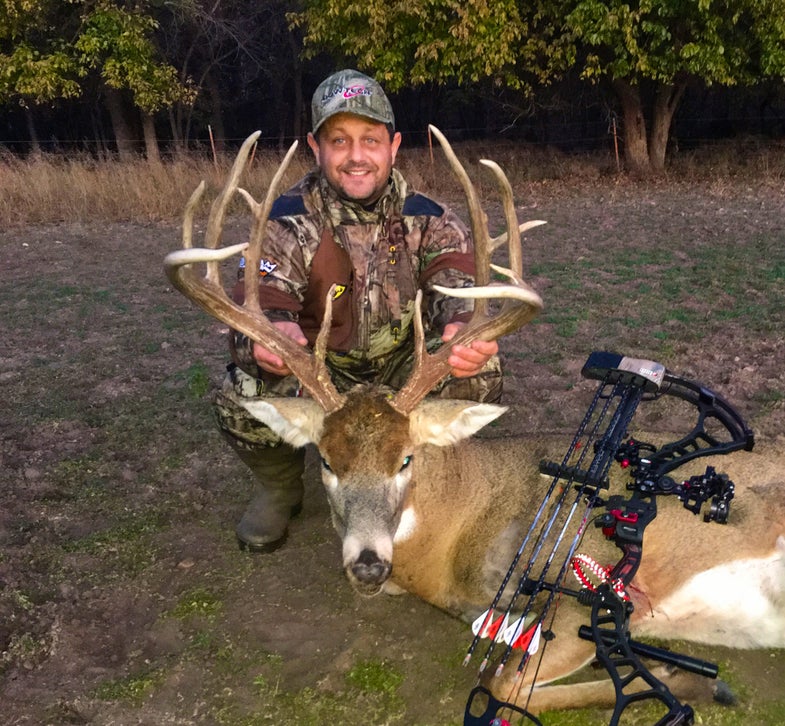 The so-called “experts” (and that includes me) love to predict when the rut will happen, but no matter how much thought and research we put into out predictions, they’re still just little more than guessing. This year is a perfect example.

Everyone (again, including me) predicted an early kick-off to the rut, but Mother Nature had other ideas, dropping an extended warm-up on the entire country. Now, I’m not sure that heat really slows down the rut, but it does keep bucks traveling at night. In fact, I’ll say it again, photoperiod has as much, if not more to do with rut activity as any other factor. Jerick Henley of the Chain Ranch agrees that no matter what’s happening, the second week of November is the best day to be in the woods. One of Henley’s hunter, James Clemenza of New York, used that knowledge to put an arrow through a true giant. Here’s Henley’s report:

“The rut went nuts last week in southcentral Kansas,” Henley said. “The hot weather must have slowed things down because we all anticipated the activity to be a bit earlier this year but it held off. This once again proves my long-standing theory that regardless of weather or moon, Veterans Day is the most important day to be in the Kansas woods. We try to schedule our archery hunt so that Veterans Day falls somewhere in that six-day period, preferably on the back end. The buck’s green gross score was 187 6/8 inches, and he was 5 1/2 years old. Killed him with a perfect heart shot at 20 yards. Recovery was less than 30 yards. The happiest man in Kansas and you can see it in his smile. He’s from NYC, and we celebrated with a glass of Van Brunt’s Stillhouse Rye, straight out of Brooklyn. Fitting ending for a great trophy.”