Good Action Over Thanksgiving With Bucks Looking for Last Hot Does

The rut can be a time of feast or famine: It’s tempting to conclude that you’ve missed out on all... 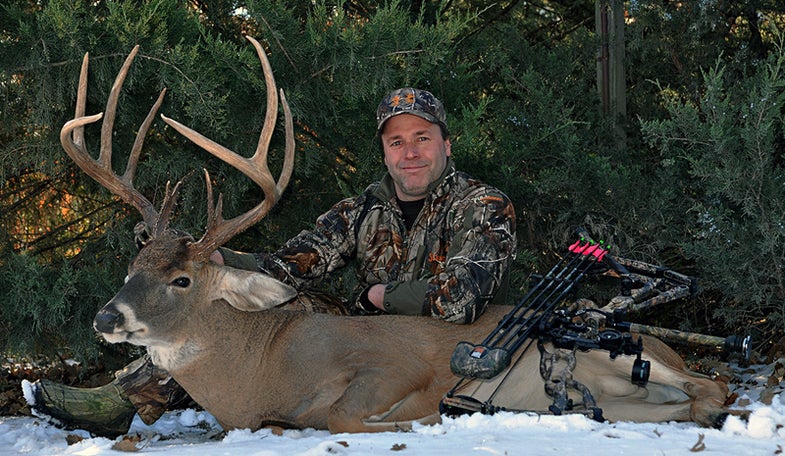 The rut can be a time of feast or famine: It’s tempting to conclude that you’ve missed out on all the fun after a day where you saw no deer movement. But one slow day in a tree stand doesn’t mean the action has passed you by, as Cope Bailey discovered during a Kansas hunt last week.

After hearing reports of heavy chasing by mature bucks just two days before, Bailey, from Houston, Texas, sat all day November 18 on a hunt at Lil’ Toledo Lodge in Chanute. Situated high on a bluff overlooking bottomland crop fields, Bailey saw the same young bucks pass by repeatedly to scent-check the fields below for a possible hot doe, but mature bucks were no-shows.

That changed quickly the next day, when “Tall Tine 9,” a buck with long, sweeping main beams, split brows and towering tines, showed up around 7:15. One good shot and a short tracking job later, Bailey had a 166-inch trophy.

The buck showed up on the lodge’s trail cameras in early October and stuck around, turning up more and more often during daylight hours, reports guide Trace Goodwin. “He started getting more and more killable as the season went on,” Goodwin says. “We were pretty excited, because he’s obviously an exceptional deer.” By November, the buck often went missing for a day between photo-ops. “We think he was traveling more, probably making a big loop to check for does,” Goodwin says. “We may have got lucky in that he was either between does or hadn’t found one yet.”

Thanksgiving week is a particularly good time to keep in mind that a painfully slow day can be followed by a very good day. Hunting on Monday, Goodwin saw light movement overall but did see a nice buck moving at first light, checking does, plus a 3 ½-year-old 10-pointer cruising alone at mid-morning. Bucks are still checking, if not chasing, which suggests some good action still to come. “I think most of the does that are going to be bred have come in, and bucks have been locked down with the ones that are easy to find,” Goodwin says. “We’re at the point now that hot does are starting to get slim, which means that bucks are going to start getting pretty frantic again soon. I look for the action to pick up around Thanksgiving.” Let the feast begin.