We’ve all heard the cliché: the whitetail rut is a hunter’s Christmas. The story of Steve Mitchell, a southeast Ohio... 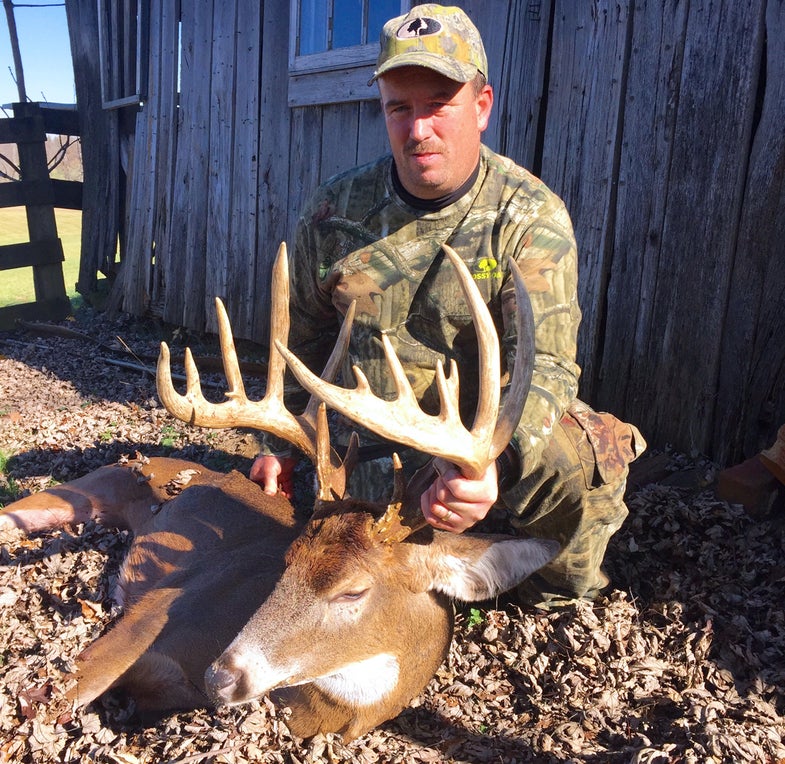 We’ve all heard the cliché: the whitetail rut is a hunter’s Christmas. The story of Steve Mitchell, a southeast Ohio hunter who killed a slammer on Sunday, in Vinton County, reminded me of that. With food plots, trail cameras, and multiple properties to hunt, he was sort of like the kid with a carefully curated list for Santa: He had a pretty good idea of what would show up under the Christmas tree. But then Santa arrived and said, “Son, we’re going to Disney World.” That’s the power of these few weeks in November: Deer you’ve followed all season can disappear, but others can just as easily show up, and make for the hunt of a lifetime.

Here’s Steve’s story, in his own words:

Sunday morning I climbed into a buddy stand on my property at about 6:15 a.m. I originally set it up in case my kids wanted to go hunting, and it isn’t 300 yards from my house. The stand is in the back corner, along a fence line, where three properties touch within 40 yards or so. There’s a lot of cross traffic in this spot in the morning as deer go back to their beds, and I was hoping there’d be a hot doe. Most of the area is open, but there is a real thin section of pines behind the stand that comes out to a point farther down the fence line. At about 8:00 a.m. a small 9-point came out on a hot doe. She circled my stand around and around. It was amazing to watch it unfold. He was probably a 120-ish buck, but we’ve been trying hard to manage the herd for bigger deer—but with neighbors that’s not always a perfect science.

Well, I knew I wasn’t going to shoot the 9-point, so I took out my phone to check a text message. When I looked down I caught something moving near the fence line on my left, in a point of pines. I just knew it was a deer. It was probably 80 yards away and getting closer. I saw the deer’s right side, and I couldn’t count the points, but I could tell he was heavy. I thought, This is a really good deer. He continued to walk toward me, nose to the ground, and stopped broadside. I later walked off the distance at 35 yards.

I practice shooting my bow a lot, especially in the off-season, but it can get hard with kids. I felt like all that practice, the hours of hanging stands, the days of checking cameras, the years I’ve spent in trees, it all came down to this moment.

When I shot, I heard that distinct sound of an arrow hitting a deer, but he didn’t react at all. He just stood there. It was like when you shoot at a deer with a gun and miss, and they don’t know where the sound came from, and they just look around. It was just like that, and I started thinking, “Did I just miss this deer?” I fumbled around for another arrow, but before I could get it nocked, he just turned around and walked off the way he’d come. I looked for an arrow sticking out of his side, but I couldn’t see anything. I didn’t see any blood pouring out, either. So after about 20 minutes, which felt like an hour, I told myself I needed to at least find my arrow. I couldn’t find it, but walking around I looked down the hill and saw him lying there. Walking up on that deer, I realized what I had shot, and it all started sinking in: This is the buck of a lifetime. This is the buck of my lifetime.

Thinking back on it, I used my 25-yard pin, so the shot was low, but I couldn’t have hit the heart any better had I tried. A lot of friends, neighbors, and, really, the whole community have been so supportive and so congratulatory. It’s been a really neat experience. I had no history with this deer whatsoever. I’ve had trail cameras in the area for the past four years and don’t have a single picture of him. After the fact, I heard that a guy doing construction on a neighbor’s house saw this buck last week coming off a different property, but I don’t know anyone who was after him. I hunt with a group of friends. We call ourselves Trifecta Outdoors, and our motto is “Expect the unexpected.” And low and behold, the unexpected really happened—right in my own backyard.