Low Deer Numbers, But Plenty of Food in Northeast

_Photo: An old doe, yearling and fawn after a mid-day visit to a deep-woods apple tree. _ You might want... 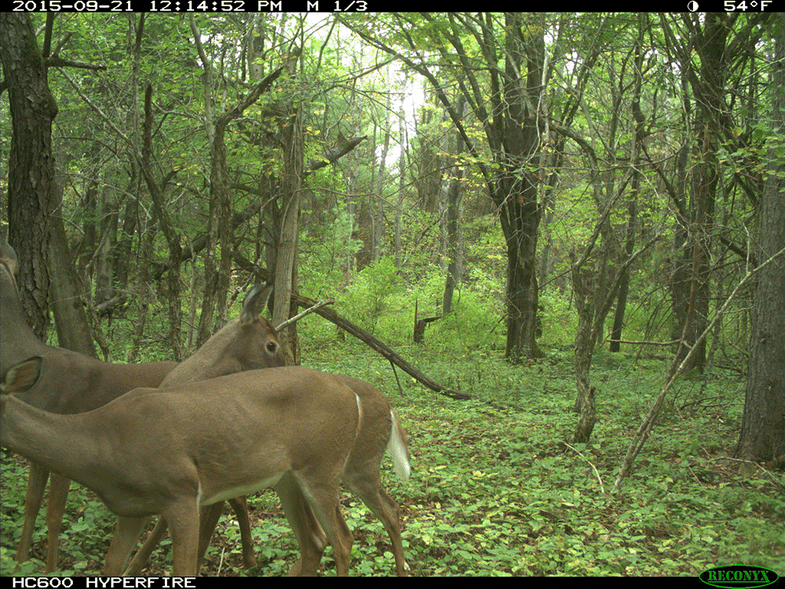 _Photo: An old doe, yearling and fawn after a mid-day visit to a deep-woods apple tree. _

You might want to go easy on the does this year.

Making my rounds of Rut Report calls last week, I spoke with Andrew LaBonte, a wildlife biologist for the Connecticut Department of Environmental Protection. Connecticut is four years into a fawn recruitment study in the northwest corner of the state. They look at 90-day fawn survival and in the past three years it’s ranged between 0.66 and 0.40 fawns per adult doe. This year it’s down to 0.22. That’s one fawn per 4.5 does.

On Sunday, the Associate Press reported low overall herd numbers in Maine and Vermont. “As archery deer hunting season opened this weekend in Vermont, the deer population is estimated to be down 11 to 15 percent from last year to about 120,000; the number of hunting permits has been reduced by 44 percent to 9,650. In Maine, state biologists recommended a nearly 25 percent reduction in deer hunting permits for 2015.”

The hard winter in the northeast, and the heavy snow conditions well into spring, are the main causes of low numbers regionally. Does under stress produce lighter fawns, and weaker fawns are a boon to predators.

Connecticut is something of a field lab for predation studies. Just 15 years ago there were very few predators outside of deer hunters, now the state is crawling with record numbers of coyotes, black bears and bobcats. More than 80 fawns have been collared in the northwest Connecticut study, which let biologist determine the cause of morality.

“Everyone wants to point at coyotes, because they make such a ruckus, but in reality it’s the quiet killers, bears and bobcats. Especially bobcats,” LaBonte said. In January, state officials checked the spot where a GPS collar stopped moving and found a 70-pound fawn buried under snow and leaves. The cause of death? Telltale signs of a bobcat kill: slash and bite marks around the head and neck. “We uncovered the fawn and took pictures, then went back the next day and the cat had returned that night and re-covered the deer,” LaBonte said. “They’re amazing animals.”

Connecticut just allowed Sunday hunting on private land, ending decades of outdated blue laws, but if deer numbers in the northwestern zones continue to drop there could be less deer tags to go around in the future, he said.

For the whitetail that made it through the winter, there’s certainly plenty of food around now. Summer is running long in the North Country, said one source in Maine. “You can see it in the trees. The fall foliage is two weeks behind schedule. Acorns are spotty, but it’s a good year for beech.”

In Connecticut, the white oaks are having a banner year. Apples and grapes are also making a strong showing. Here in western New York you can’t hike a ½ mile without seeing three or four bursting apple trees, but the red oaks seem to be producing more than the whites. New Jersey, Maryland and Delaware are also reporting above-average acorns.

“Acorns are spotty here,” said Tim Woods, who runs Hunt Masters Lodge in Ohio. “Some of the hardwoods are chock full, other farms don’t have them at all.”

“If I’m going out right now,” he said, “I’m sitting a green field.”
Hardcore rut behavior is still a few weeks off, but across the region skipper bucks are pushing each other around, and harassing nearby does. If you know your area’s preferred food source, this could be a good week to sit with cool temps and light wind across much of the northeast. A small font could move in at the end of the week, with rain expected most places on Friday, Saturday or Sunday.