Although the Kentucky archery season has been off to a rather slow start for many hunters I’ve interviewed, and for... 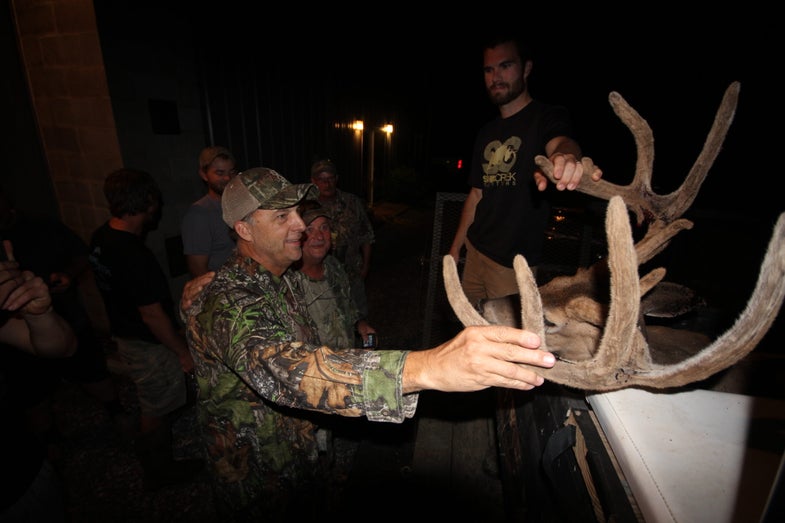 Although the Kentucky archery season has been off to a rather slow start for many hunters I’ve interviewed, and for me, others have found success.

Two of those hunters are Louisianans Eddie Villeret and Rodney Gremillion, who booked a hunt with Snipe Creek Lodge (270-436-2626), which operates primarily in Calloway County, Kentucky. Snipe Creek owner Carl Doron and his guides have long been faithful contacts for my Mid-South Rut Reports.

But rather than a rut hunt, Eddie and Rodney made the long drive north in hopes of killing a couple of full-velvet bucks. Although a hot and stagnant weather pattern clung to the Mid-South on Friday, the day before the opener, spirits were high in camp as a cold front was forecast to move through on Saturday morning.

The opening hours of the 2014 deer season remained hot and muggy. I know that for a fact, as I was hiding in a pop-up ground blind that was decidedly oven-like as soon as the sun rose. But by mid-morning, a stout a north wind began blowing, and the heavy humidity fell. Although the morning hunt had been slow, Carl reported numerous deer sightings by hunters camp-wide after that first evening’s hunt, although no shots were taken.

The weather stabilized after the front that night, and the conditions for Sunday evening were shaping up to be the weekend’s best. It didn’t disappoint. Eddie and Rodney were sitting in ladder stands a few miles apart from one another that evening, and the first couple hours of the sit were predictably slow. But the woods came to life with deer movement during the last 45 minutes of daylight. Eddie said several deer were in the field in front of him when he spied a pair of good bucks headed his way.

“They looked almost identical, and I could tell they were both big,” he said. When the first buck provided a clear, quartering-away shot at 25 yards, Eddie took it. The buck, a giant 10-pointer still in full-velvet and later rough-scored at 165, ran a short distance and crashed. (That’s Eddie, above, with his hand on Rodney’s shoulder, as the two admire Eddie’s buck.)

But the excitement wasn’t over. At just about the same time Eddie was waiting for his shot, Rodney was looking at a field full of deer as well. “I had a nice 7-pointer in perfect velvet come in early,” he says. “I wanted to shoot him, but he was just a tad small.”

Passing on that buck turned out to be wise. As the final minutes ticked away, more deer stepped into the field, and what appeared to be the biggest the hunter had seen yet stopped broadside at 25 yards. “I couldn’t tell for sure what he was; I knew he was at least a good 8, or maybe even a 10. Regardless, I decided he was big enough for me and took the shot.”

The buck disappeared almost immediately into a field of head-high vegetation, but didn’t make it more than 100 yards before crashing. It turned out to be a pretty 8-pointer that had recently shed its velvet. Strips of fresh sapling bark clung to its bases. Although Eddie’s buck was bigger and still wearing that coveted velvet, it’d be a toss-up as to which hunter was happier. “Velvet or not, that buck is my best-ever bow-kill,” Rodney said.

I’m guessing both deer, and the conversation that goes with them, will make for a much faster drive back home to Louisiana, but a long wait until Kentucky’s early season next year.