Good Hunting at the Tail End of the Rut

Bucks have been active in South Carolina, Arkansas, and Georgia, where we’re nearing the end of the rut. You can... 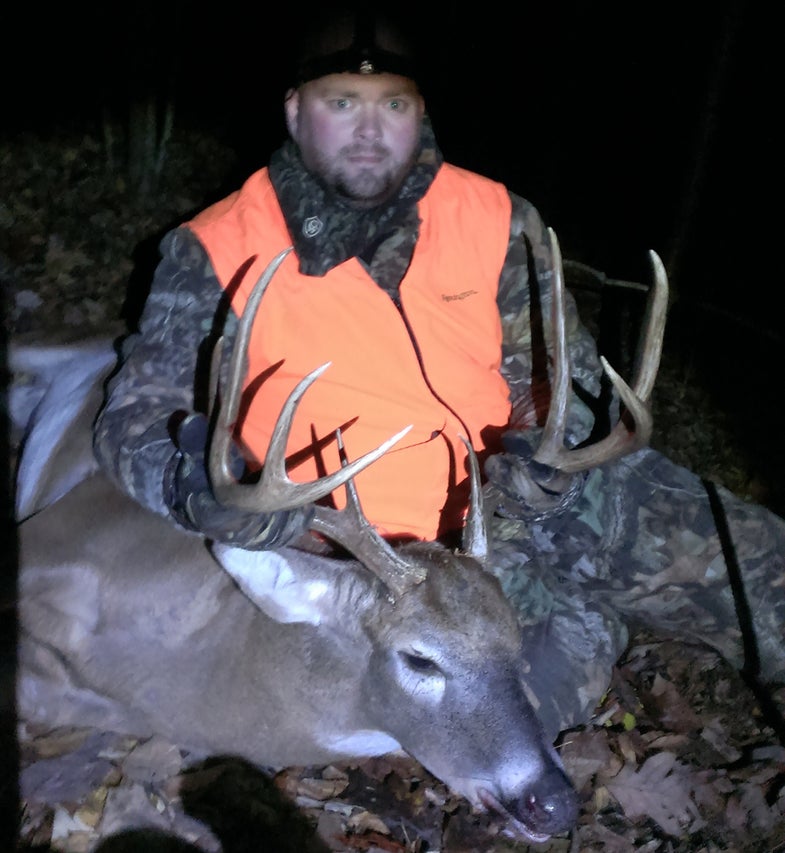 Bucks have been active in South Carolina, Arkansas, and Georgia, where we’re nearing the end of the rut. You can still use rut tactics to score, but bucks are getting weary and pressured, and obviously there are fewer of them in the woods because other hunters have tagged them.

One of those hunters is Clay Cason, who hunts a dairy farm in Morgan County, Georgia, east of Atlanta. He went to his stand last Tuesday afternoon, November 18, located in a field near a tree line. “At about 5:15 I had two large does come out of the tree line at the top of a hill. I continued watching them, waiting on a buck to come out. A few minutes later another doe came out and headed down the hill,” Cason recalls. A four-pointer stepped out, watching another deer go down the hill, a nice buck.

“I grabbed my gun and put the crosshairs on his shoulder. I started to pull the trigger and told myself to calm down. I took some deep breaths and got settled in. I pulled the trigger and saw him kick his back legs up, and I watched him run back into the tree line. Just seconds later I thought I heard him crash,” Cason said. After some searching, Cason found his trophy, shown above at left. “I basically ran to the deer like an excited little boy. The first thing that I noticed was his G2 on the left side. It measured 11 ¼ inches. He ended up being a 9 pointer. I haven’t had him scored yet but I believe he will be between 140 and 145 gross.”

The buck was obviously in rut. “He field dressed at 160 pounds, his neck was very swollen, and his hocks were stained black and soaking wet,” Cason said.

The bucks were rutting hard in the north Georgia mountains, too, where Kyle Withrow (pictured below) had a great day of hunting. Positioned in a saddle over a deep hollow, Withrow started using a can bleat call. “It wasn’t long before two bucks came busting over the top of the ridge, running back and forth, trying to wind the doe that was bleating. I finally got one to stop, and I shot. Being it was only 8 a.m. and the action was heating up, I didn’t get up to see go see the deer. I started grunting again, and it wasn’t long before I heard footsteps. I had three other bucks come through, and a hog, in the next few hours,” Withrow remembers. After quartering up his buck, he began to hike and stillhunt back to his truck.

“I followed along some laurel that had a lot of good rubs, and I made it to a pretty flat when I saw the other deer coming. He came through at a fairly fast walk and he got within 30 yards before I had a shot. I had a small window to shoot through and made it happen. He ran about 50 yards and piled up.” Withrow, above right with that buck, experienced an exciting morning of hot rutting buck action in the mountains and tagged out with two nice eight-pointers.

The rut action won’t last much longer in Georgia, Arkansas, and South Carolina. On the other hand, deer are in pre-rut in Alabama, Mississippi, and portions of Louisiana and Florida. Hunters should start seeing more rubs and scrapes, with bucks becoming more active as we edge closer to the rut in those states.