Relief from the Heat in the Southern Deer Woods

While Bestul is reporting a near mast-crop failure in the Midwest, we have a much different story in the southern... 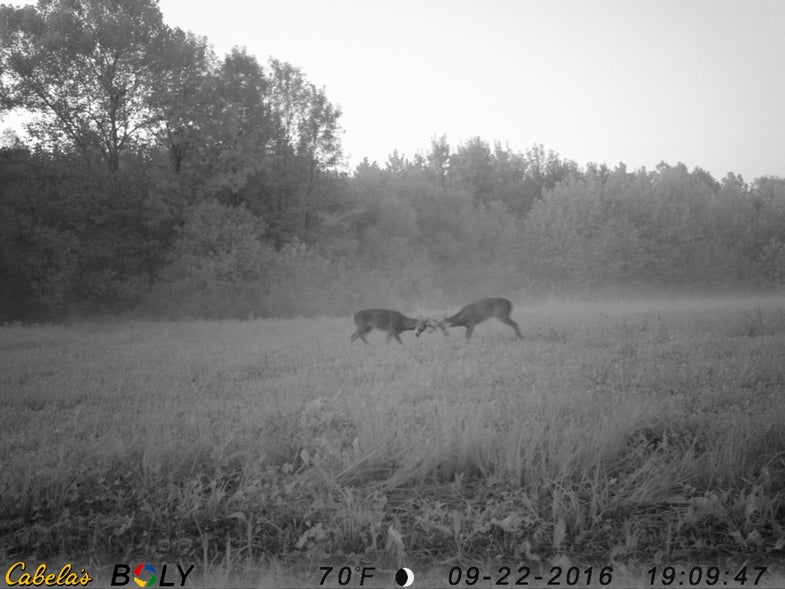 Brantley captured this image of two bucks locked up in a food plot in Mid-September. Will Brantley
SHARE

While Bestul is reporting a near mast-crop failure in the Midwest, we have a much different story in the southern deer woods. Both white and red oak acorns have been falling in abundance around here since the end of August, and they’re playing a huge role in the deer hunting right now. Harry Pozniak, owner of River Valley Farms in western Kentucky, says the big deer have all but abandoned their late-summer patterns to feed on acorns—but there’s still good hunting to be had for those willing to adjust their strategy. We had a major cold front, the first of the season, blow through earlier this week, and it cooled the daytime temperatures from the low 90s down into the 70s. At the very least, it feels a bit more like deer season outside.

Of course, that’s not to say the deer are completely ignoring other food sources. Bean fields are yellowing up fast around here, and a number of them are already being picked. I’d say at least half of the corn in this area has been combined as well, and I’m seeing a number of deer—albeit mostly does and small bucks—hitting the harvested fields in search of waste grain. In addition, my food plots are still producing some action. The other day, I pulled a card from a camera that’s been monitoring a ladino clover / chicory plot—my go-to blend—since the first of September, and the late evening activity has been pretty consistent. I even captured a cool sequence of these two bucks locked up during the final minutes of shooting light.

Seasons are open—or set to open soon—throughout the region. Kentucky’s crossbow season begins Oct. 1, and Tennessee’s archery season opened last Saturday. I plan to be in my climber on a Tennessee white oak ridge this afternoon. Speak up, southern hunters. What are you seeing out there?