Photo: Courtesy of C.J. Winand How’s this for a feel-good story? Earlier this year, we photographed a group of young... 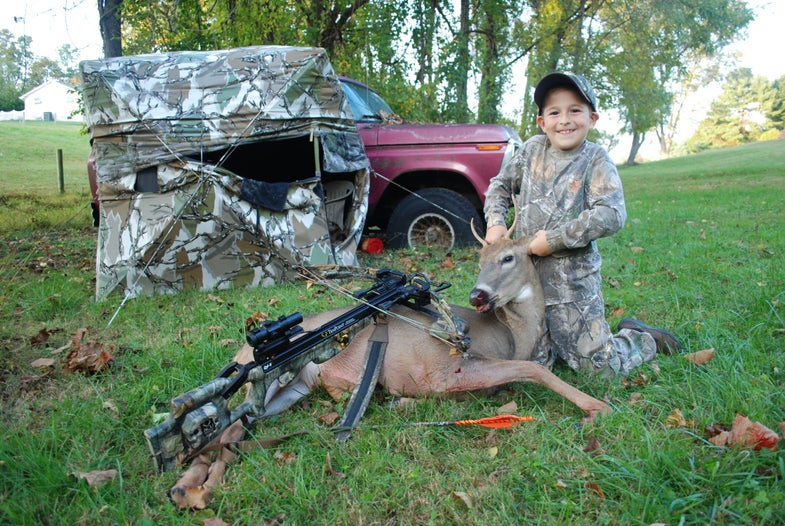 How’s this for a feel-good story?

Earlier this year, we photographed a group of young hunters and anglers for our June cover story, “How to Raise a Wild Child.” One of those kids was Ryley McCardell, a 9-year-old who loves to hunt, fish, and camp with his family. Ryley was our model fisherman for the photo shoot (see below), but he also loves to whitetail hunt—and this fall he hunted with a crossbow for the first time and killed this Maryland spike.

What’s great about this story, though—aside from the fact that Ryley’s clearly a deadeye with a crossbow—is that Ryley’s guide on the hunt was one of the other parents from the F&S photo shoot. C.J. Winand, whose daughter Jesse was featured in the magazine, invited Ryley and his dad, Shawn, to hunt whitetails on his property.

On Oct. 9, Ryley and Shawn took C.J. up on his generous offer—and within 15 minutes of the hunt, Ryley had filled his tag. “I never hunted with a crossbow, but I liked it a lot,” Ryley told me. “I was excited that I got to do everything by myself—hold the crossbow, aim it, and shoot. I was proud of myself.”

Something tells me, though, Ryley wasn’t quite as proud as his Dad. “Having C.J. there to help Ryley gave me the chance to step back and observe it all,” Shawn said. “I watched Ryley as the deer came in and as he squeezed the trigger. The look on his face [when the deer went down] was priceless.”

C.J. added: “Exactly who among the three of us was more excited is still unanswered!”

I don’t know about you guys, but I think it’s pretty awesome that a couple of families came to an F&S photo shoot as strangers, and left as friends. And it’s especially awesome that C.J. went out of his way to help teach a young hunter and give him an experience he’ll never forget.