For Dave Chanda, the bald eagle that he saw soaring over Pennsylvania Avenue when he arrived in Washington D.C. last... 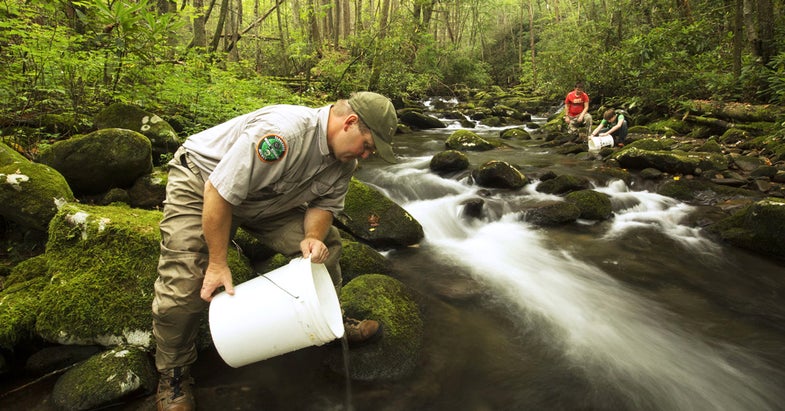 For Dave Chanda, the bald eagle that he saw soaring over Pennsylvania Avenue when he arrived in Washington D.C. last week was symbolic of what he was in town to do.

And, he hoped, a good omen.

Chanda is the director of the New Jersey Division of Fish & Wildlife. He’s also the current president of the Association of Fish & Wildlife Agencies, which works to collaboratively advance sound, science-based management on a national level. That objective includes working with legislators to enact conservation and management policies that benefit fish, wildlife, and habitat, and get funding to make that happen.

It all sounds a bit wonkish until you realize just how much of a conservation crisis the agencies are in, because of an acute lack of the funds they need to put toward the protection of fish, wildlife, and habitat. There’s nothing wonkish about watching a species of woodpecker or tortoise or trout disappear for good because you couldn’t afford to actively manage a species in decline.

That’s why Chanda’s bald eagle—a species that was brought back from near-extinction throughout much of its range—gave him hope.

Chanda was in D.C. to introduce the findings of the Blue Ribbon Panel on Sustaining America’s Diverse Fish & Wildlife Resources. The panel, formed by AFWA and composed of 28 national business and conservation leaders who represented interests from Hess and Toyota to the National Wildlife Federation and the Congressional Sportsmen’s Foundation, met three times over the past year to figure out “a more sustainable funding approach to avert a fish and wildlife conservation crisis.”

In other words: How can we get more money to states so that they can pay for the programs that will save fish and wildlife for future generations?

The Third Part of the Triangle
State fish and wildlife agencies get some of their funding from the Pittman-Robertson and Dingell-Johnson Acts, those well-known excise taxes on hunting arms and ammo (P-R) and fishing tackle (D-J). What’s unique about these taxes is that they are self-imposed: hunters and anglers deliberately paying part of the cost to maintain the fish, wildlife, and habitat that are necessary to their sports.

But, as David Freudenthal, former Governor of Wyoming and National Co-Chair of the Blue Ribbon Panel, pointed out, “Money from the hook-and-bullet crowd is not enough anymore.”

The list of federally endangered and threatened species is at 1600 today, and many expect it to increase to thousands in the near future. When a species becomes listed, the financial impact to businesses, along with the cost of regulatory compliance, runs into the millions—and that’s not to mention yet another blow to our ecosystem.

“There are expectations by the public to look after non-game animals, but hunters and fishermen can’t pay for it all,” Freudenthal said. “Hunters tell me, ‘I’m buying a hunting tag for elk, but my money is going toward grizzly bears—a species that’s trying to eat the elk I want to hunt!’”

America has something to treasure, Freudenthal noted, and we need a way to protect it. “For example, the meadowlark is not a game species in Wyoming, but it’s the state bird, and people care about it,” he pointed out. “But nobody is paying a penny for the non-consumptive use of wildlife.”

According to the Blue Ribbon panel, the solution is this: Dedicate up to $1.3 billion every year from existing energy and mineral resource development revenues to funding for state fish and wildlife departments. That equates to 10 percent of the total $13 billion that is already collected from the sale of these non-renewable resources. The fund would be a permanent authorization, not an annual appropriation. Half would come from royalties and lease revenues collected on onshore energy and mineral development, the other half from offshore.

“In 1937, sportsmen said, ‘Let’s tax ourselves to save game,’” pointed out Collin O’Mara, President and CEO of the National Wildlife Federation. “The P-R Act and D-J Act resulted.

“This funding is the third piece of the triangle.”

An Investment for the Future
It’s well documented that the outdoor industry, which is directly reliant on healthy fish and wildlife populations to succeed, generates $646 billion annually and supports more than 6 million jobs. At the same time, children are becoming increasingly disconnected from the outdoors, losing out on life-improving experiences and negatively impacting their well-being. And it’s largely up to the state agencies to provide that nature…which they increasingly can’t afford to do.

John Morris, Founder of Bass Pro Shops and Co-Chair of the Blue Ribbon Panel with Freudenthal, bluntly pointed this out. “I jumped at the chance to participate on the panel, because agencies are at a crossroads,” he said. “State agencies have an unbelievably important role. They’re being asked to do more and more, but they can’t rob from game species to maintain non-game species.”

Dave Chanda mentioned the recent successful attempt to keep greater sage-grouse off of the endangered species list. “The money raised for landscape-level conservation resulted in no ESA listing for the sage-grouse,” he said, which prevented a tremendous loss of revenue resulting from a listing.

That’s why the bald eagle soaring over the nation’s capitol filled Chanda with such hope. Twenty years ago, there was one nesting pair left in New Jersey. Now there are 190 pairs and the species is no longer endangered—another example that on-the-ground conservation efforts and investments pay off.

Photograph courtesy of USDA/Flickr. A fish biologist with the Tennessee Wildlife Resources Agency release brook trout into a stream.