On the Ground at Malheur Refuge

It’s just after daylight, 12 degrees or so, in an ice fog that turns the big sagebrush around the parking... 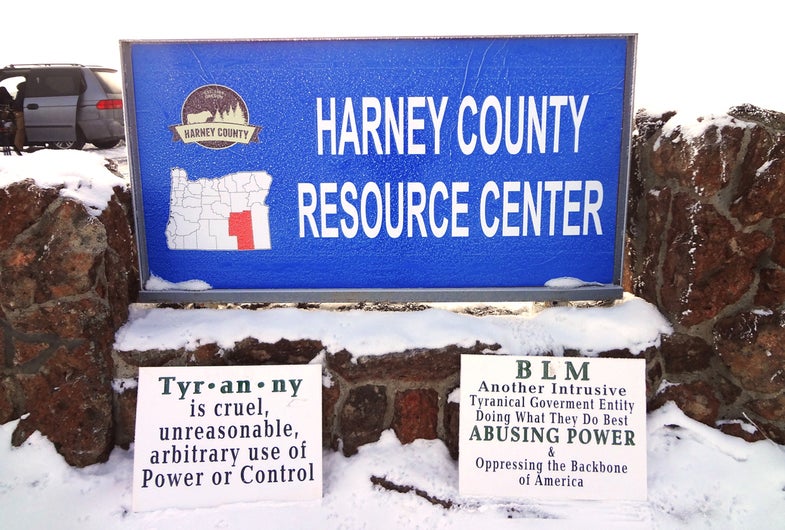 It’s just after daylight, 12 degrees or so, in an ice fog that turns the big sagebrush around the parking lot into silver-white frost sculptures. The old wooden sign in the lot that said Malheur National Wildlife Refuge has been hauled away, and replaced by an official-looking blue plastic slab of a sign that reads “Harney County Resource Center.”

Duane Ehmer is already on post, riding Hellboy, his beautiful cowhorse, the big American flag flying behind him. Duane is a welder by trade, a veteran who once had a long and disheartening fight with the Veteran’s Administration, a man who has made his living catch-as catch-can in the arid inland West as cowboy and sawyer. With the photogenic Hellboy and the big flag, Ehmer has become the face of the takeover of the Malheur National Wildlife Refuge headquarters, though he’s quick to tell you he’s no leader. “You’ll have to talk to people who know more than I do. I’ve just got a small part of this life.”

Ehmer wears a leather jacket emblazoned with the American flag, rides a classic McClellan cavalry saddle, and packs a Colt 1860 cap-and-ball revolver in a holster on his left side, the grip turned for a right-handed cross draw. “I don’t think the feds are too worried about this gun, do you?” he asks. “But I wouldn’t want to get shot with it, myself.” Ehmer rides toward a group of media cars that are arriving. “An old cap and ball pistol, and they call me a terrorist!”

Blaine Cooper is sitting in the pickup that blocks the road down into the refuge headquarters, running the heater. The occupiers here like to talk, to explain themselves, and he’s no exception. “We’ve been bullied by the federal government for too long. We’re doing what we have to do to stop the bullying. They destroyed this land, ran the ranchers off…”

Far above us, a man is sweeping snow from the many, many steps leading up the firetower, where other figures show in the windows. Radios crackle at the little guard post behind the trucks, where a pretty good fire is burning, with more people clad in camo—mostly cotton, and they’re looking very cold, huddled there, rifles slung.

It is hard to say, exactly, what the plan is. In talks around the fire at the guard post, occupiers like Sean and Sandy Anderson, a husband-and-wife team originally from Wisconsin, now of Riggins, Idaho, range too widely to nail down any certain philosophy. Most people I meet are both armed and very friendly, and we talk, as we talk around campfires across America, about guns, and politics, and land and work. I make it absolutely clear that I do not agree with any plans to turn over America’s public lands to the states, or counties, or private individuals, and that is no problem—people here disagree all the time. There is a range of politics here from the utterly bizarre to the moderate right. Pretty much any U.S. president one brings up for the past 30 years is despised, though some, like the current resident of the White House, are hated.

In the course of these conversations, it’s easy to forget that, at any minute, the lawful authorities of our country could rain hellfire down upon us all, and be justified, pretty much, in doing so. The fact that the hellfire has not come—does not come—seems to me to contradict much of what these friendly occupiers seem to believe about our nation and our government.

At 11 o’clock, there will be yet another of the media events that define the mornings. Some of the rifles will disappear. Rented Suburbans arrive, tires crunching in the snow, filled with camera crews and TV news anchors looking severely underdressed for winter on the sagebrush steppe. The freelance photographers point cameras at Hellboy and Duane, at the various anti-government signs posted, and they wait, milling. The guard post with the campfire attracts a few of the bolder reporters, and the occupiers there welcome them. Everyone is waiting for the real stars of whatever this show is—Ammon Bundy and his entourage.

Up until today, the narrative has been all Bundy’s, the microphones set up by the news organizations devoted to hearing the grievances of the Bundys and their followers, short lectures on the U.S. Constitution, and the delivery of unlikely proposals to give the refuge lands to the people of Harney County for logging, mining, and grazing. When Ammon Bundy and the Arizona activist LaVoy Finicum conclude this morning’s announcement of plans to use refuge equipment to remove fences, Garrett VeneKlasen, Executive Director of the New Mexico Wildlife Federation, steps in front of the bank of microphones and begins to speak. At first, the media people, obviously cold and ready to leave, keep packing up. But as VeneKlasen continues, some of them return to their cameras to capture the performance of a man who is clearly furious. “This is my land, and this refuge is a part of this community. What’s happening here is a travesty. This isn’t a solution to our land management problems. There’s no reason to candy-coat this anymore. These people are bullies, and domestic terrorists. This is not the way and everybody knows it.”

Someone in the crowd asks, “Do the feds own too much land?” and VeneKlasen responds, “We’re talking about the federal government as if it were some monster out there, when it’s us. It’s we the people. When did we get to this point where we think of it like that?” To another question, he responds, “I have guns, I have an arsenal of guns, but you don’t see me go waving them all around. That’s crazy and it’s not solving anything.” The news people listen—theirs is a business that thrives on conflicting voices, and up until today, the occupiers of the refuge have mostly been unopposed.

Mark Heckert has driven here in his old pickup from Puyallup, Washington, where he owns a small environmental consulting firm. He’s a long-time member of Backcountry Hunters and Anglers, a big, no-frills guy in his 50s, and he’s clearly less than amused by the media and the Bundy presentation both. He pulls out a big piece of cardboard, crudely lettered in Sharpie “Get the Flock Outta My Refuge.” Later, Heckert will tell me, “I made another sign comparing these guys to the Bhagwan Rajneesh, but then I realized nobody younger than 50 would get it.” (He’s referring to the time in the early 1980s when followers of the Baghwan Shree Rajneesh overwhelmed the tiny town of Antelope, Oregon, and voted en masse to change the town’s name to Rajneesh. The takeover went bad when the followers dosed the non-believing locals with salmonella at salad bars in restaurants in The Dalles, sickening over 750 people. At the time, non-believers in eastern Oregon referred to the guru as “the Bagworm,” and his followers as “bagworms.”)

A few photographers shoot the cardboard sign, and Heckert. One of the occupiers, a bearded man dressed in khaki pants and blue blazer, engages Heckert in a conversation that ends when the occupier says “You need to read your Constitution,” and Heckert, who’s just told me with both pride and worry that his son has just graduated from Army Ranger school and been posted to Fort Campbell, Kentucky, looks him in the eye and says slowly, “Don’t tell me what to do.”

Coming up the road from the occupied refuge buildings is a convoy of U.S. Fish and Wildlife Service pickups, civilian trucks, an excavator on a trailer, and the crew of occupiers that will remove the fence and open the refuge lands to grazing. Bundy stated at the press conference that the rancher who owned the land beside the refuge has requested that the fence be removed. A short section of barbed wire was taken down, the work serving as the day’s spectacle for the media. By nightfall, the rancher, a man named Tim Puckett who does not live in the area, will make it clear that he knew nothing about the fence removal project. By Tuesday, Puckett’s cowboys were out in the snow, rebuilding the fence.

On Monday afternoon, I drive the 30 miles back to Burns (population 2,806) and stop in at B&B Sporting Goods, where a young man with a wind-burned face is trying to get the eye-relief right on a scope mounted on a brand-new Savage .22-250. Nobody wants to talk on the record (“This is a small business in a small town,” the man behind the counter said.) But could I just get a sense of what people in Burns are thinking about the refuge takeover? “Yes. We want all of them to go home.” The young man working on the scope smiles and echoes that sentiment. “Home. They need to go home.”

I would miss the town meeting held that night at the Burns High School gymnasium where that idea was made abundantly clear. Whatever the legitimate grievances that the local ranching community has with federal land management (and there are plenty of those), whatever injustice had been done in the sentencing of ranchers Steve and Dwight Hammonds (here is a good explanation of their case), the occupiers had never been welcome and local patience is running out. The offices of the Bureau of Land Management, the U.S. Forest Service, and the U.S. Fish and Wildlife Service are all closed, putting about 150 Burns residents out of work. Claims that militants have been following and harassing these employees have kept Harney County Sheriff Dave Ward on edge since early December, and infuriated residents.

As Sheriff Ward explained to the crowd: “The fact is there is an hourglass, and it’s running. And time is going to run out.”

Or, as Randy Parks, editor of the Burns Times Herald, told me, “Bundy said that when the county asks his people to leave, they will leave. And we did. And they didn’t.”

(See this Backcountry Hunters and Anglers video about the Malheur and the occupation.)