Any angler quickly learns this indisputable fact of nature: Changes in water temperature change fish behavior. The reason is simple:... 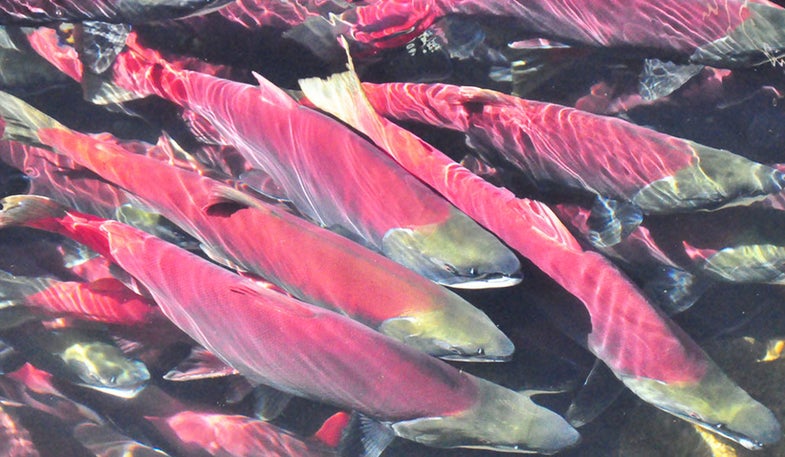 Climate change may be altering North American inland fish, such as the sockeye salmon.. Flickr/MartialArtsNomad.com
SHARE

The reason is simple: Cold-blooded critters have no way of regulating their body temperatures, so their environment determines their metabolism, as well as their survivability. Indeed, many of us pay as close attention to water temperatures as we do to air temperatures when planning fishing trips. So it should come as no surprise that a compilation of recent fisheries research in North America shows global warming is already affecting many of our most popular recreational species.

In fact, the news is so important that the American Fisheries Society devoted the latest issue of its magazine Fisheries to the news.

Fair warning: This is science, not opinion. The observations are based on measurements, not anecdotes. The figures reported in the studies are facts, not suspicions. For those of us searching for facts and evidence, what you’ll find reaffirms what biologists have long predicted: Some of the first responders to warming will be cold-blooded species.

Four papers in the issue reviewed the results of 31 research projects in the U.S. and Canada that documented the responses of fish species to climate change. They found fish impacts already are measurable among cold- as well as warm-water species.

Among the more significant findings:

• Climate change may be altering abundance and growth of some North American inland fishes, particularly cold-water fish such as sockeye salmon, a species experiencing well-documented shifts in range, abundance, migration, growth, and reproduction.

• Climate change may be causing earlier migration timing and allowing species that never occurred together previously to hybridize. For example, native west-slope cutthroat trout in the Rocky Mountains are now hybridizing with rainbow trout, a non-native species.

• Shifts in species’ ranges are already changing the kinds of fish in a specific water body, resulting in new species interactions and altered predator-prey dynamics. For example, in Canada, smallmouth bass have expanded their range, altering existing food chains because the species compete against other top predators for habitat and prey fish.

• Droughts are forecasted to increase in frequency and severity in many parts of North America. Such droughts exacerbate the impacts of water flow regulation in ways that affect people, fish, and aquatic systems.

The researchers also pointed out documenting these early trends in a process that is only expected to get worse in the years ahead provides managers with the time to implement programs that will allow fish—and anglers—to adapt.

Of course, they can only do that if the politicians that control their budgets and programs get their heads out of the denial sands and admit what the facts are showing.

And that’s where anglers can help: In the election season ahead don’t vote for deniers—or even those who like to diminish the threats we face due to human-caused climate change.

Most national sportsmen’s groups are actively involved in urging action. You can find out more about the problem and the solutions here.